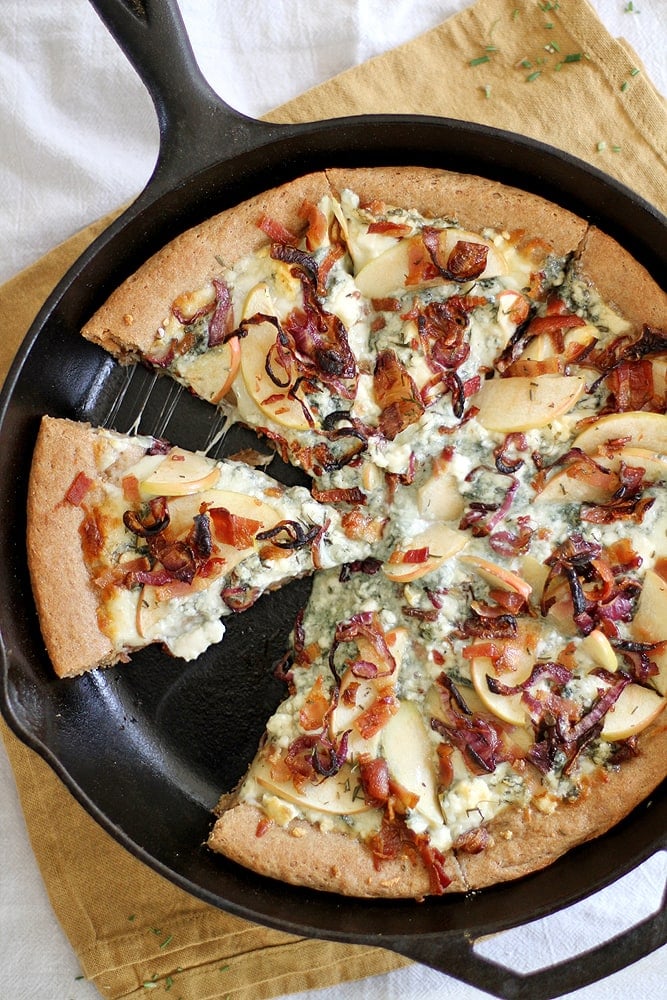 True story: This pizza was gone in less than 12 hours. That either means a) we are not eating enough pizza in this household so when we do, it’s a free-for-all or b) this pizza was just that good.

Considering I ate my weight in delicious pizza last weekend (and my husband has been known to down an entire frozen pizza on his own without blinking), I’d say it’s the latter.

But really, when you’ve got crispy bacon, caramelized apples and onions and loads of melty mozzarella and blue cheese for toppings, are you surprised? I know I sure wasn’t. 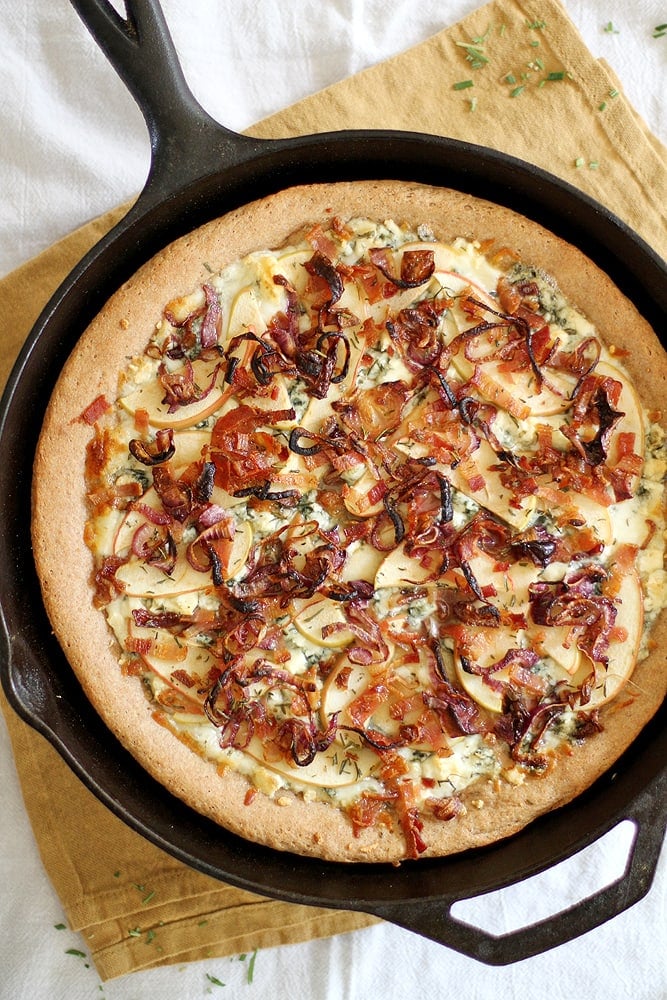 Plans for this pizza went a bit awry when I went to make it last week. Originally it was destined for the grill (as a grilled pizza, by the way. I feel like that needed clarification), but not-so-ideal weather and, more likely, my laziness got in the way and so a pan pizza it became. But honestly, it turned out so much better that way. The crust was crispy on the bottom, soft on the top, and the perfect thickness with which to hold up all the ridiculously yummy toppings. So thanks, Gross Weather and Laziness, for being on my side for once. Apparently they, too, understood the importance of making the best pizza possible.

What do I love most about this pizza? Oof, why do you always ask the tough questions? OK OK, I’ll tell you. I love the crust, obvi. But I really also love the pairing of the sweet-tart apples (that caramelize when baked in the oven atop the pizza, yasssss) paired with the sharp-salty flavor of the blue cheese. Oh but I also love the buttery caramelized onions scattered across the top of the pizza. Ooooh, but that melty mozzarella cheese, though. And bacon = love, always. 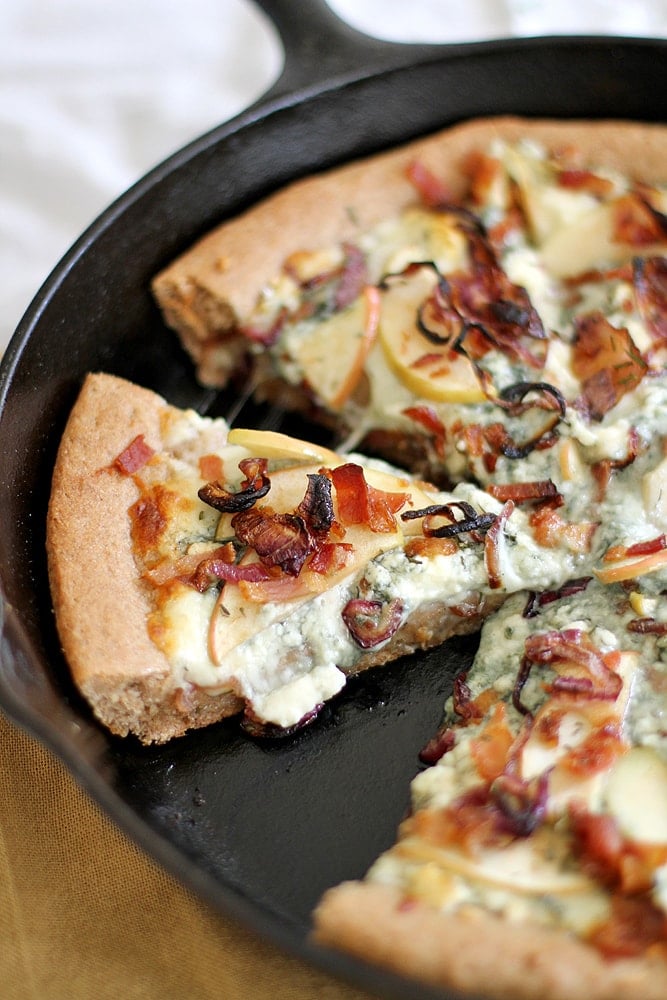 So basically I love all the things about this pizza. And so will you, when you make it for your next pizza night (I’m pushy, I know. But you really should).

I used my recipe for 100% whole wheat pizza dough this time around and it was dee to the licious, but you can use whatever pizza dough you fancy — yes, even storebought. But if you’ve got a little extra time, I highly suggest going the homemade route. See the recipe below for other pizza dough recipe options for ya! One of them involves beer and the other wine, so there’s some good stuff going on.

Of course, if it’s been a while since you’ve had a pizza night in your house, I also highly suggest making two of these pizzas, lest you want to be pizza-less within 12 hours. And I don’t think anyone wants that. 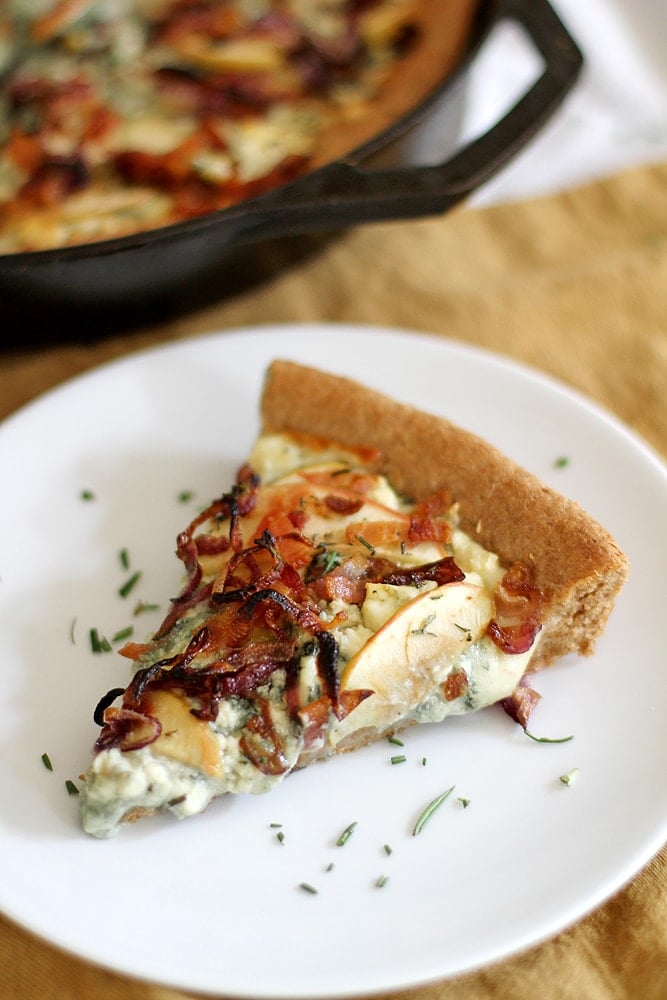 posted by Stephanie on September 8, 2014