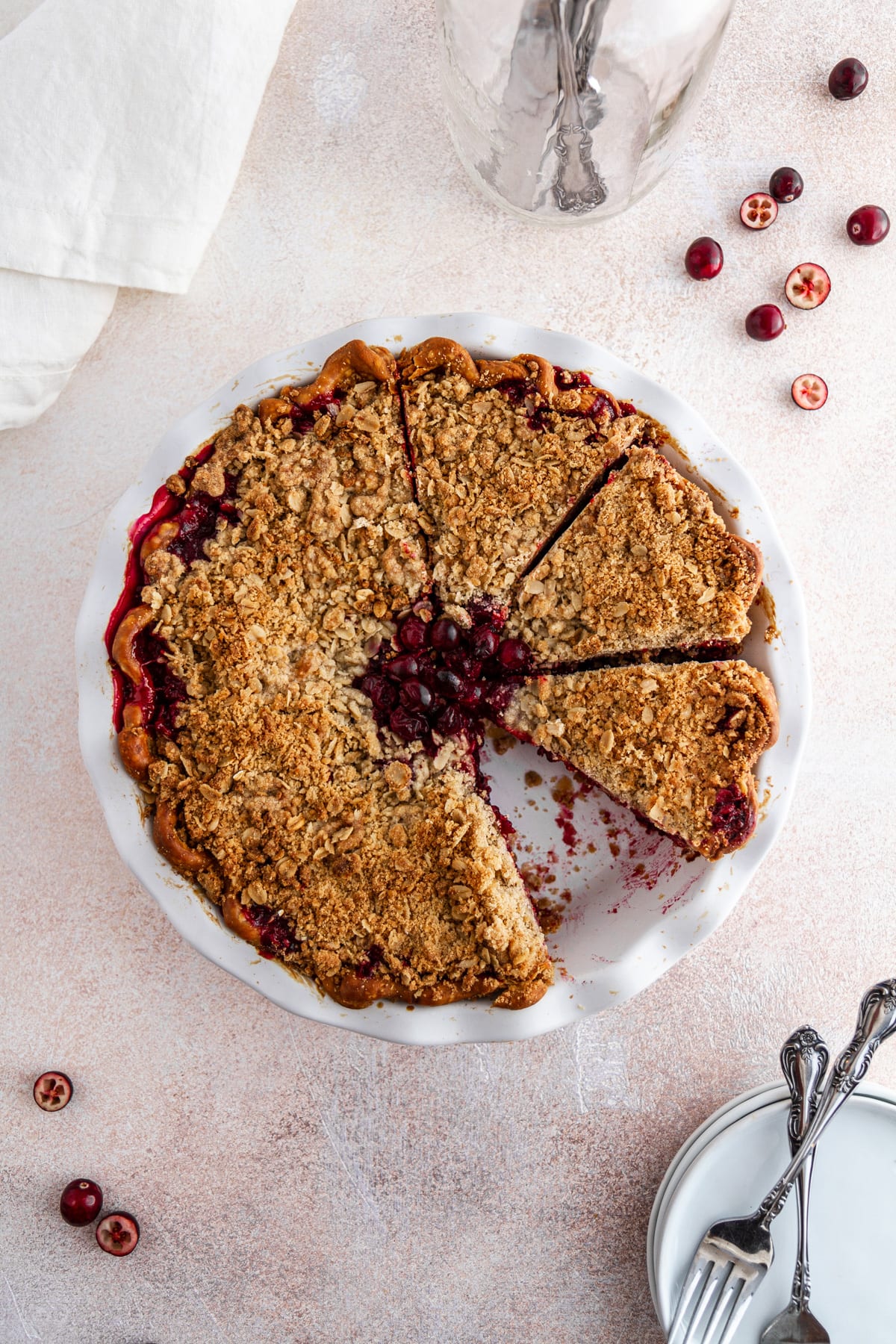 Need a showstopping pie for the holidays? You’re looking right at it. This Cranberry Crumble Pie features a ruby red sweet-tart filling of fresh cranberries and warm spices topped with a thick oat crumble all baked in a buttery, flaky pie crust. Serve with scoops of vanilla ice cream for the ultimate dessert that’s bound to become a new favorite. 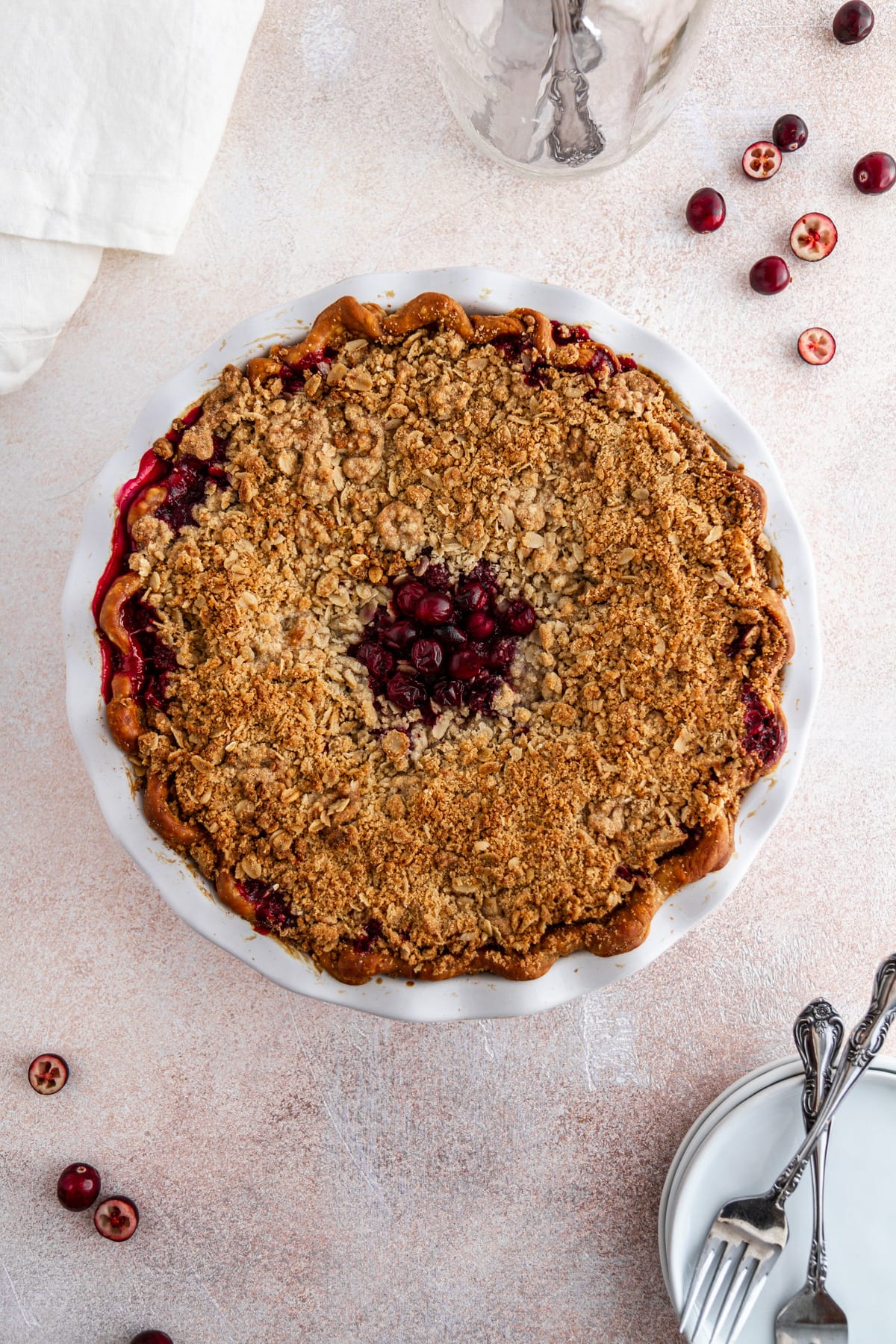 Dare I speaketh the words? Thanksgiving is just over a week away. I know. I KNOW. I’m equal parts excited and freaked out, if I’m being honest (and really, when am I not here). However you’re feeling, know this: There is pie to be had, and if you haven’t decided yet which pie that will be, may I highly suggest that you’re looking right at it?

This cranberry crumble pie is 100% my new favorite go-to pie recipe for Thanksgiving. The sweet-tart filling of fresh cranberries and warm spices like allspice and nutmeg and cinnamon pairs perfectly with the generous oat crumb topping. It’s like if homemade cranberry sauce and fruit crisp had a baby, and that baby is this delicious pie. And this delicious pie needs to be a part of your holidays. 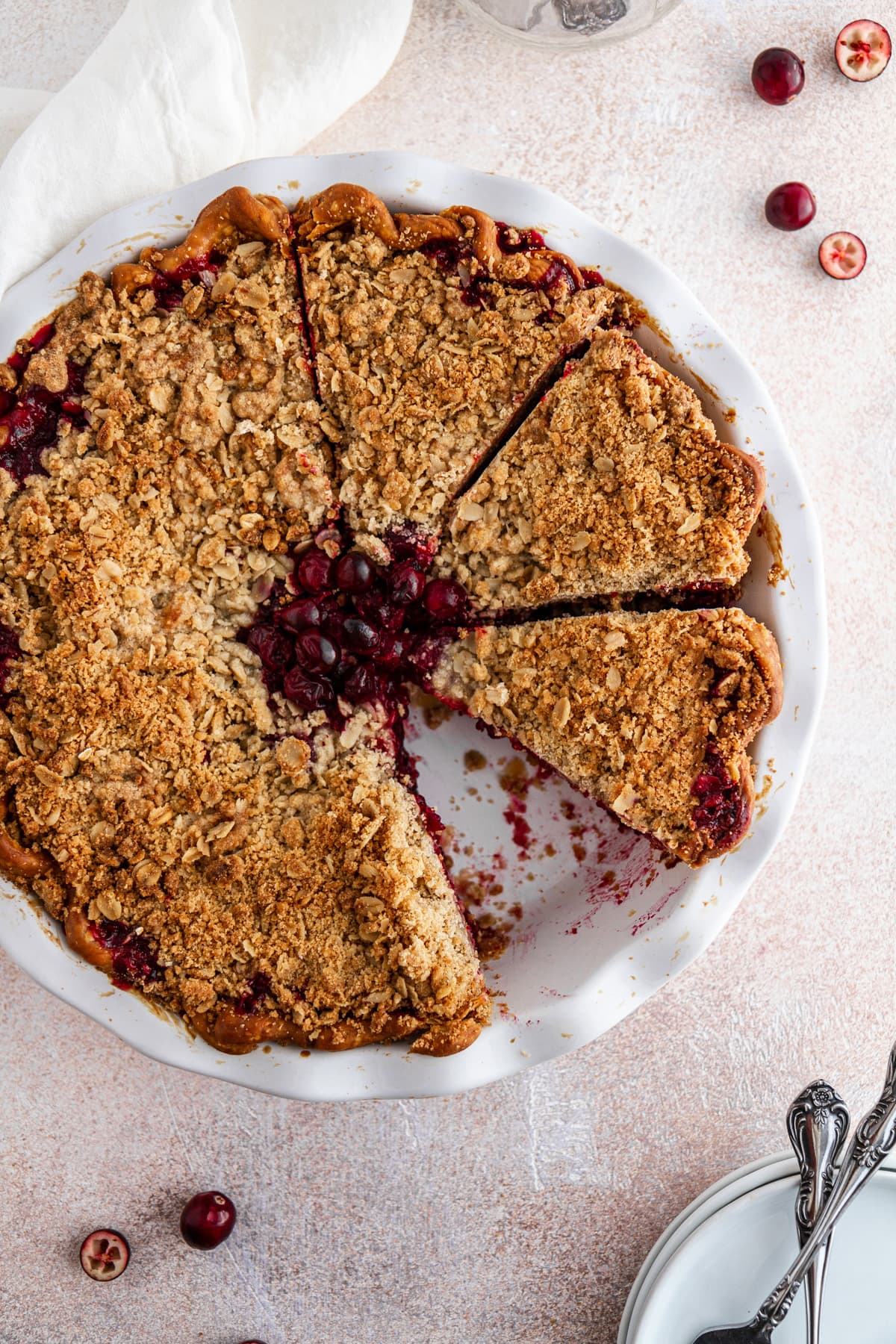 How to Make Cranberry Crumble Pie

OK that sounds great and all, but like, how do you actually make this pie? It’s really like any other kind of pie. For this dynamic dessert, we’ll need to do three things: Make the filling, make the topping and blind-bake the pie crust.

First, let’s make the filling: Cook a combination of fresh cranberries with brown sugar and orange juice/zest (or the juice/zest of an extra clementine you have hanging out in your fridge, as I did) just until the berries begin to burst their bright-red juices. Let the mixture cool, then stir it together with more sugar, some tapioca flour to thicken the filling, a few more whole fresh cranberries and some shredded pear, which will break down during baking to help set up the filling.

Second, let’s make the topping: Combine oats, flour, brown sugar, cinnamon and butter until everything is combined into coarse crumbs, like sand. Thassit. 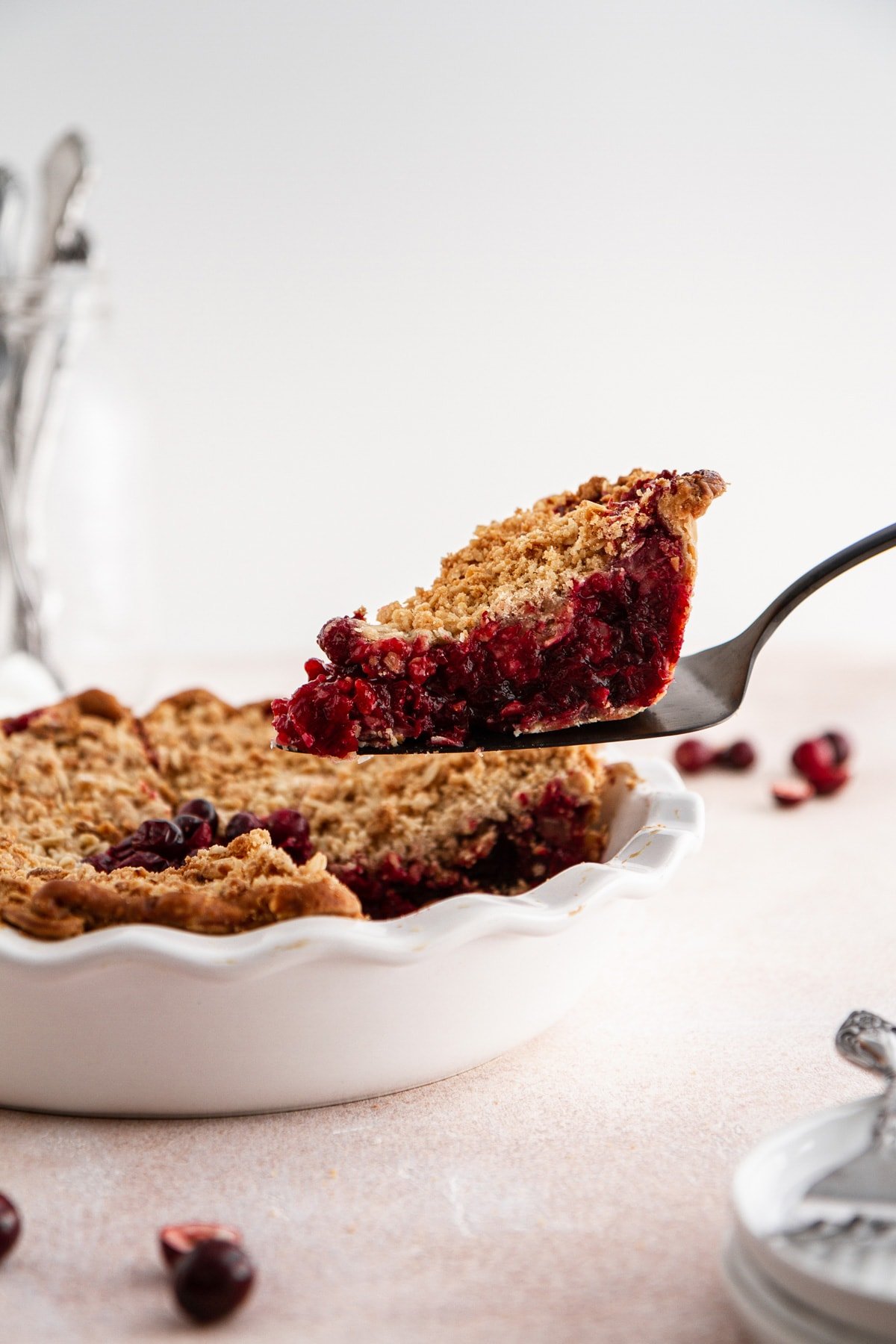 How to Blind-Bake a Pie Crust

The third and final step is to blind-bake the pie crust. This sounds scary and complicated, but trust: It’s SO easy.

If you’re using a store-bought pie crust, simply follow the directions on the packaging for a one-crust filled pie. In general, the directions will tell you to fit the pie crust into the pie pan, flute the edges and bake the crust as-is until just set.

If you’re using a homemade pie crust (like my all-butter pie crust), you’ll need to take a few more steps to ensure success. Once you’ve fit your crust into the pie plate and freeze it for a few minutes to help firm it up, fill the pie with a layer of foil and pie weights or a couple of pounds of dried beans. Bake the crust until lightly golden and set, then remove the foil and weights before filling the pie. The end! See, told you it was easy. 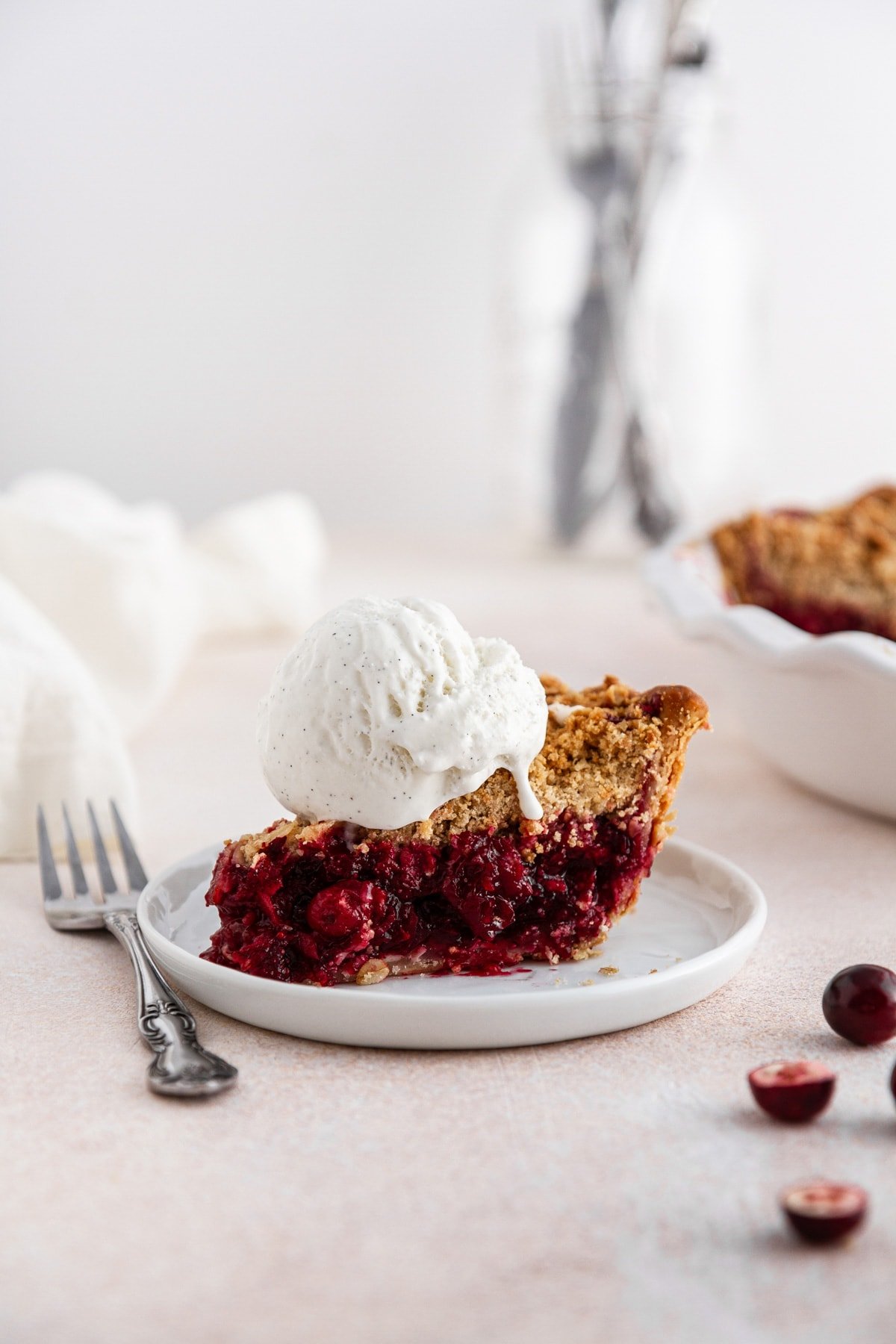 Tips for Baking Your Best-Ever Pie

I know you’re really just itching to get your Thanksgiving menu planned (including this pie for dessert, OF COURSE), so I won’t keep you much longer. But before we part, a few tips!

I have a lot of things to be thankful for this season, and this cranberry crumble pie recipe is definitely one of them. One bite, and I think you’ll feel the same way.

A sweet-tart, fruit-filled pie with fresh cranberries and a thick, buttery crumb topping. Serve with vanilla ice cream for the ultimate holiday treat!