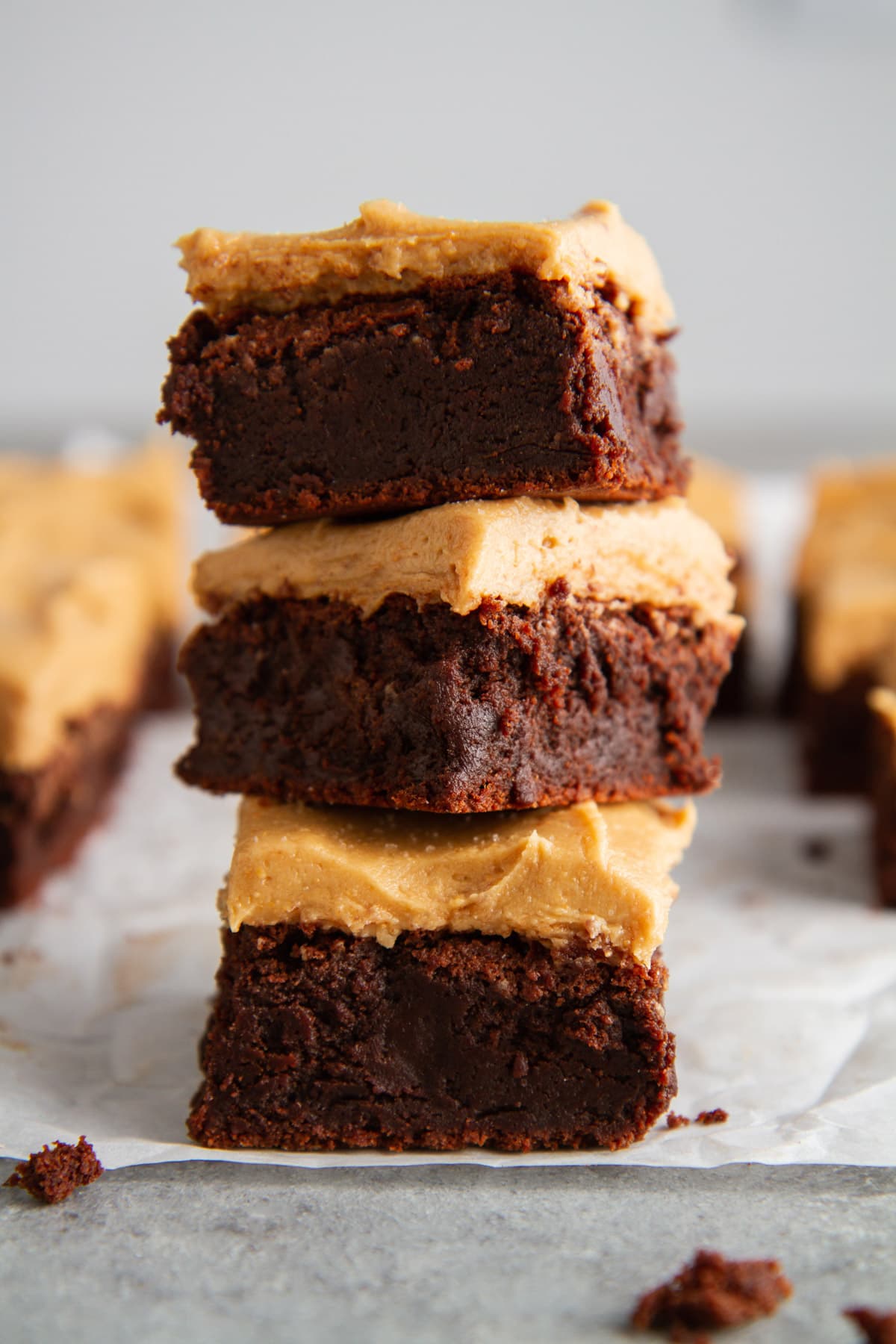 These Fudgy Brownies with Cashew Butter Frosting are the real deal, you guys. Dense, thick and moist brownies are topped with a creamy, ridiculously indulgent cashew butter frosting that is so good, you’ll want to eat it with a spoon. But don’t, because the pairing with brownies is even better. Just one bite and you’ll agree.

First, it’s FINALLY February. Oof, did anyone else feel like January was six months long? I am so glad we made it. And since everyone and their mom, literally, has talked about how cold it was this week (yours truly included), we can now all collectively celebrate the fact that it’s warming up and getting that much closer to springtime. In fact, here in Minnesota, we are expected to reach the 40s by Sunday. PRAISE BE.

Second, these fudgy brownies. Recently I realized that I have exactly one brownie recipe on my site and, you guys, that’s not OK. For someone who really loves brownies, this is a poor reflection on one of my favorite dessert choices. If you put me in front of a bowl of ice cream and a plate of brownies and made me choose, I would always choose the brownies. Though, let’s be real — ice cream with brownies is really the winning option.

That being said, if you put me in front of a bowl of ice cream with brownies and a plate of these fudgy brownies with cashew butter frosting, there is no contest — these frosted brownies will win, every time. They’re THAT good. 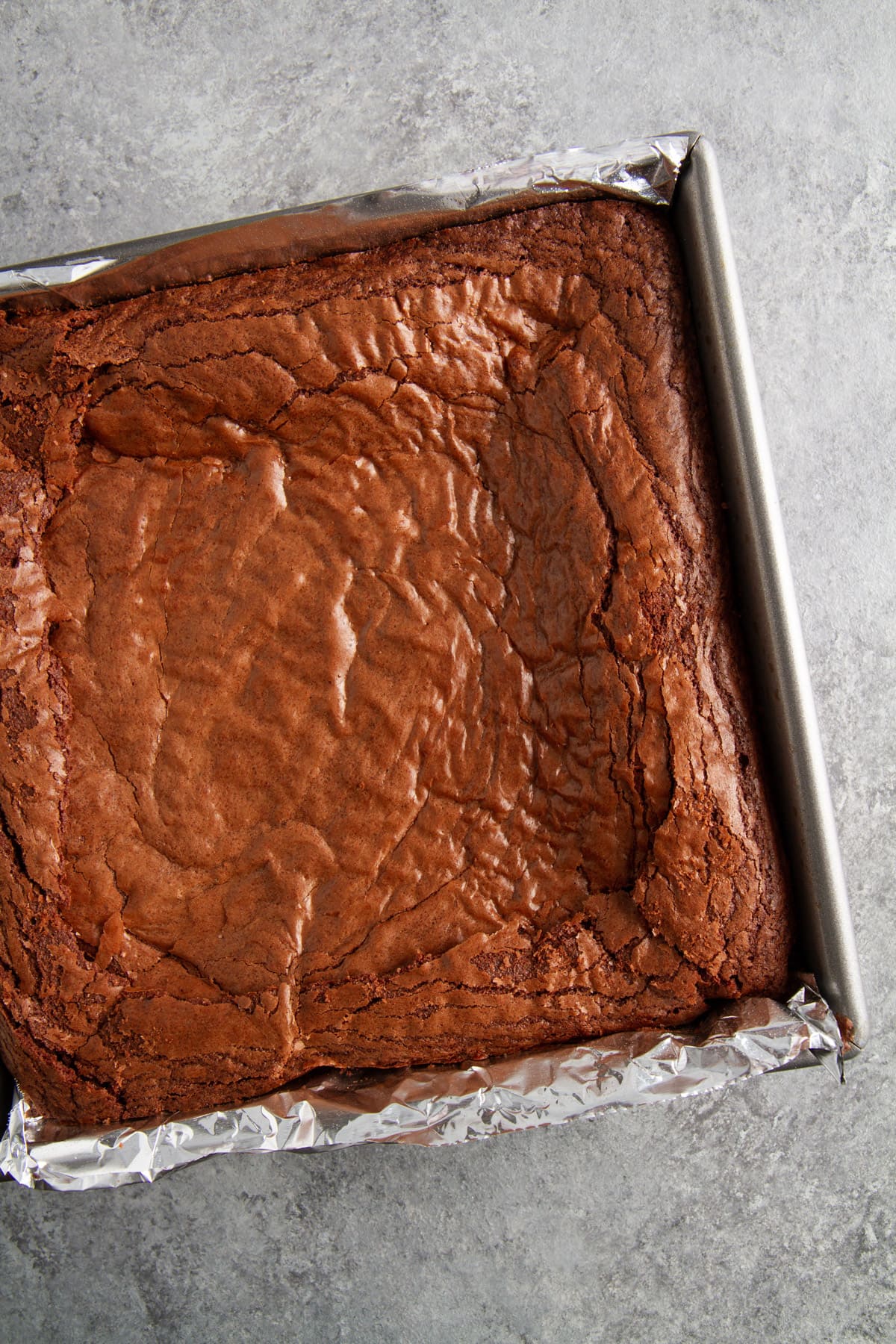 THE SECRET TO THE BEST FUDGY BROWNIES

Do you want to know a secret? The secret to making the best fudgy brownies of your life? I can thank Tessa of Handle the Heat for learning this trick with her ultimate brownies recipe, and it’s this — chocolate, butter and sugar. I know you’re thinking, “OK but Steph, these ingredients are in all brownies” and that is true, yes, but it is how we incorporate them into the batter that makes the difference:

1. The butter is melted, not beaten with the sugar, which preserves the dense fudgy-ness of the batter, rather than adding air to it and thereby making it too cakey.
2. The chocolate component comes from chocolate chips and baking chocolate, rather than cocoa powder. This keeps the brownies moist instead of dry and crumbly because of the lack of cocoa butter in cocoa powder.
3. There is only granulated sugar in this recipe, instead of a combination of brown sugar and granulated sugar. Brown sugar can often add too much moisture to the brownies, which then won’t give you that crinkly crust. Additionally, beating the sugar with the eggs means the sugar is dissolved in the batter before it even hits the oven, also adding to that soft, fudgy texture and crinkly crust.

In short, these fudgy brownies are BROWNIE GOALS: just as easy to make as a typical brownie recipe, but with far superior results. And because we bake them in an 8×8-inch pan as opposed to a 9×13-inch pan, they’re extra thick and tall. That being said, if you prefer thinner brownies, feel free to bake these in a 9×13-inch pan — just adjust the baking time so they don’t overbake. 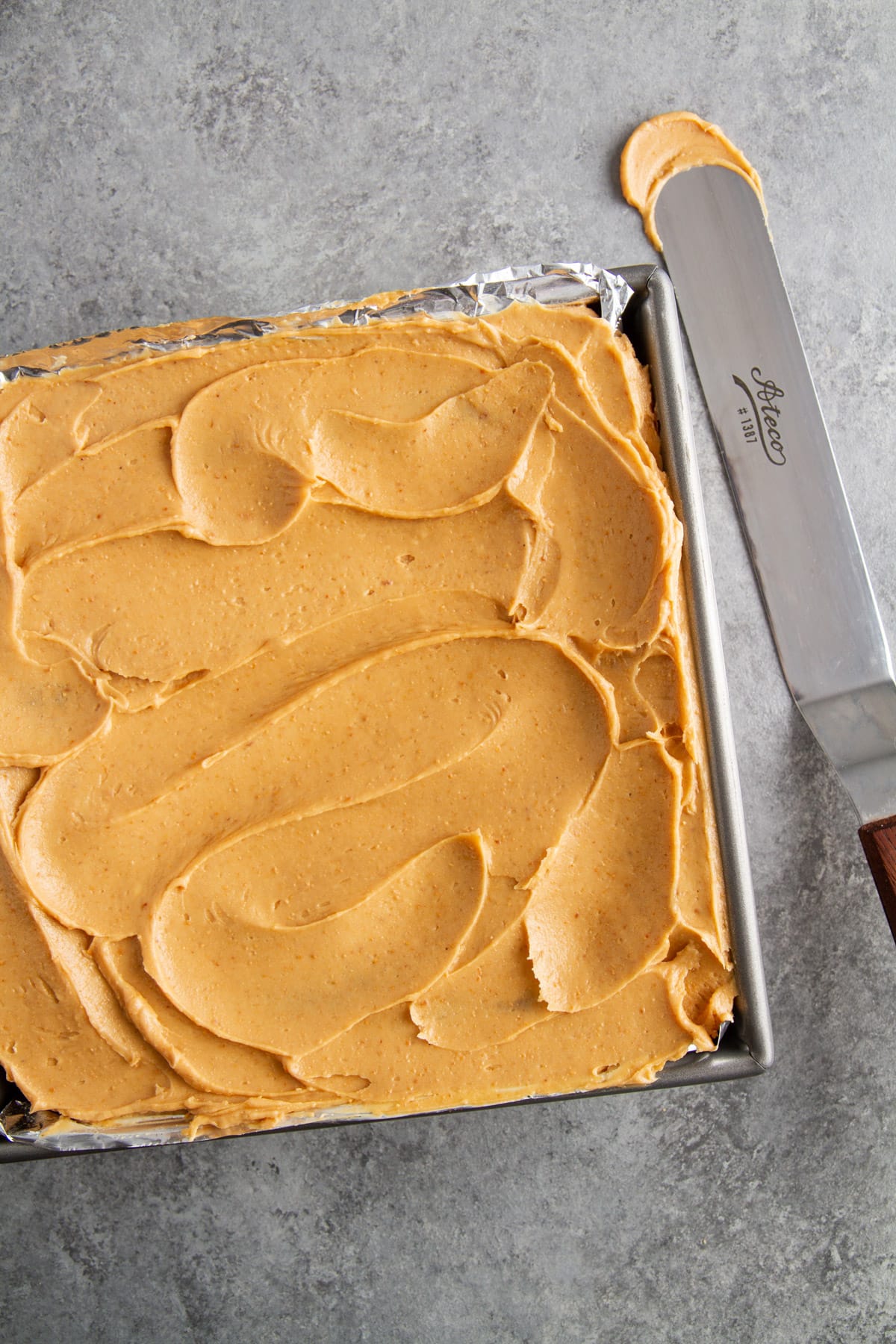 HOW TO MAKE CASHEW BUTTER FROSTING

OK but my actual favorite part of this recipe is the cashew butter frosting. This frosting is not for the fainthearted — it’s thick, it’s creamy, it’s smooth and it’s supremely decadent. If you’ve never tried cashew butter before, it’s a similar consistency to peanut butter but the flavor is slightly milder and, of course, cashew-y. I love it. And it lends itself beautifully to a buttercream frosting.

All you need to make the frosting is butter, cashew butter (which is readily available next to the peanut butter at most grocery stores or online), powdered sugar, milk and vanilla. Once you beat everything together until it’s smooth, you spread it over the cooled brownies and give it a finishing touch of sea salt, if you like that sweet-salty thing (hint: I DO). 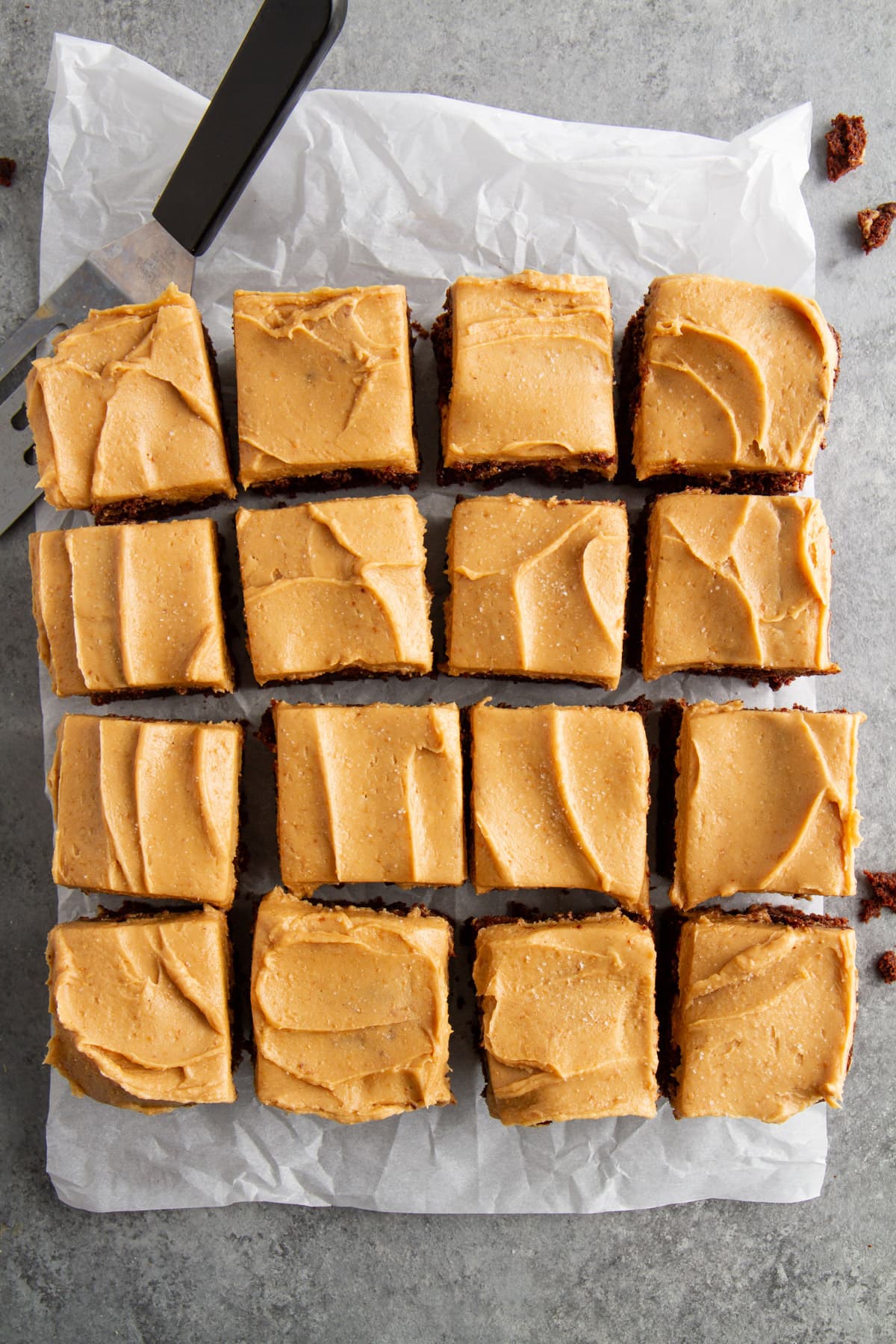 Again, if you decide to bake these brownies in a 9×13-inch pan, you can keep the frosting recipe as is for a thinner coat of frosting. But if you want an exact 1:1 ratio of brownie to frosting, double the recipe.

Since it’s finally February and that means the Super Bowl is around the corner (as in, this weekend, which I literally only know about because my husband told me #Iliveunderarock) and Valentine’s Day is but a fortnight away, there are plenty of reasons why these fudgy brownies should be in your life. But of course, who really needs a reason to bake brownies other than just because? I know I don’t. And I won’t leave you hanging so long for a new brownie recipe next time, either. PROMISE. 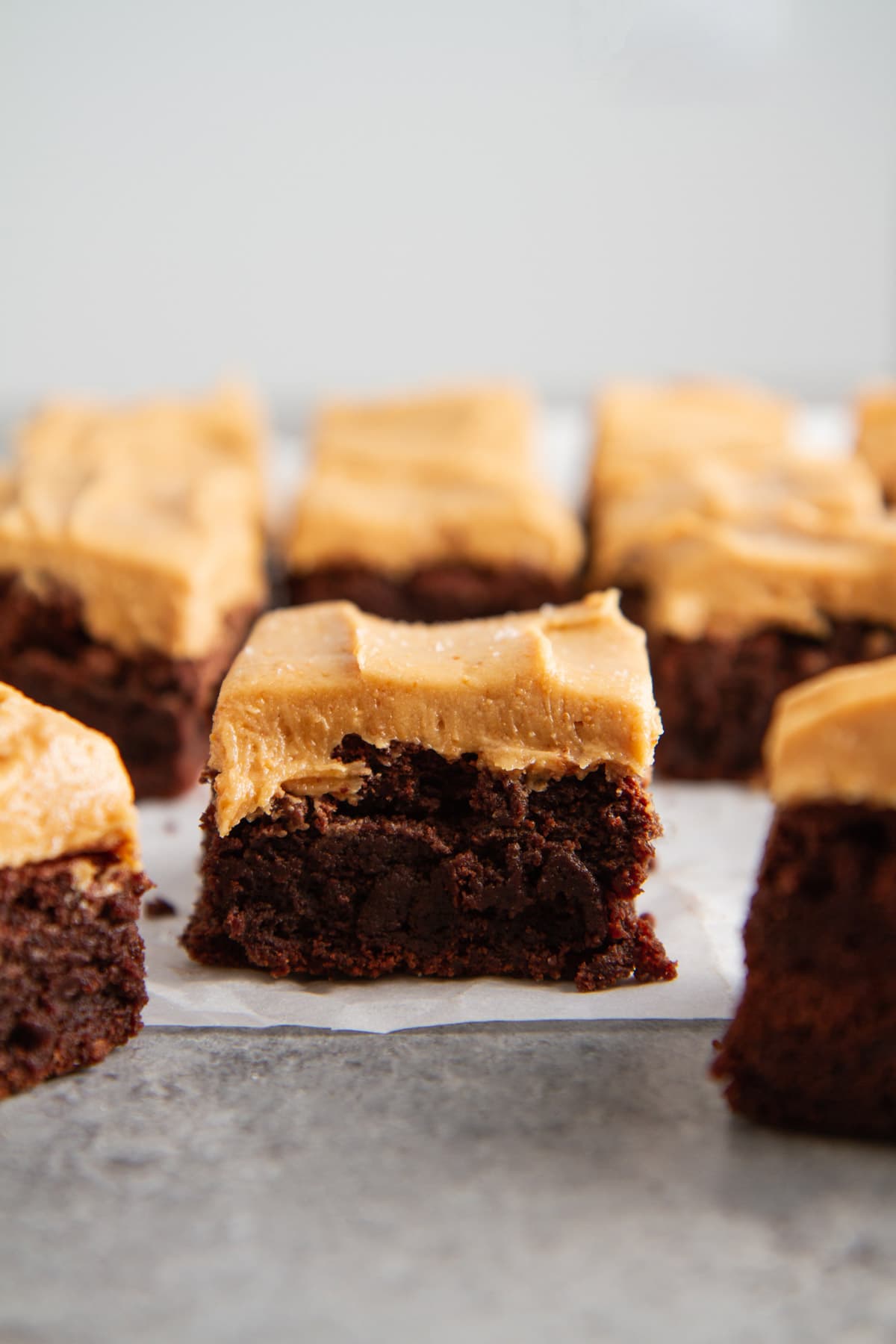 For the cashew butter frosting: