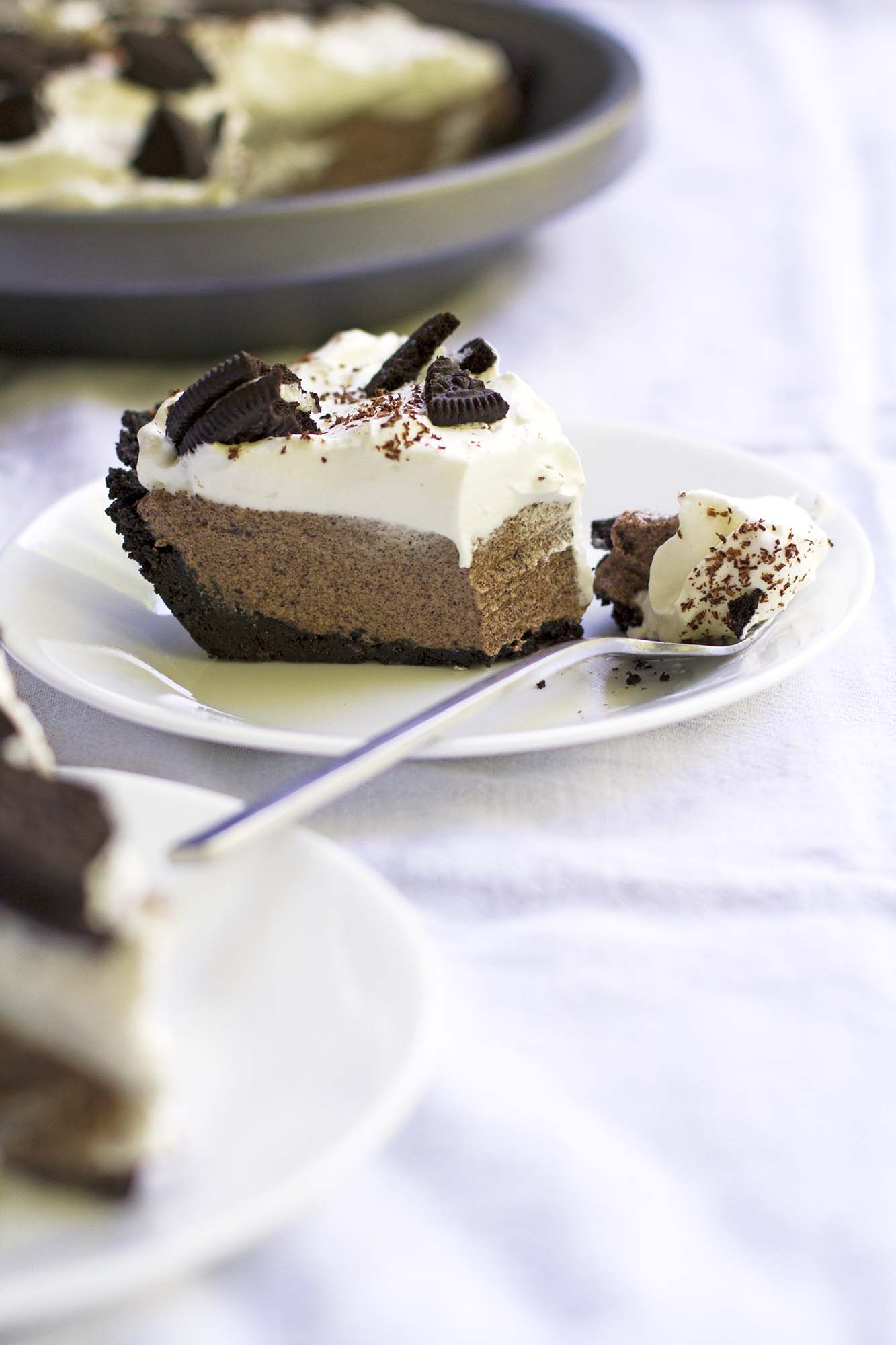 Oh hi. It’s been a few weeks, no? How are you. I hope you’re well. I’ve brought a no-bake French silk Oreo pie for us to share, so let’s each grab a slice (or two, no judgement) and catch up.

As I’ve mentioned in previous posts, we officially now live on the road full-time as of June 29. It’s been a whirlwind of change and adjustments and new experiences, the highest highs and the lowest lows. I’m trying to give myself grace in the sense that not everything is going to just go super-smooth right out of the gate.

And yet, it’s also been so very awesome. We’ve had adventures we’ve never been able to have before because of work schedules/timing/etc., like cross the headwaters of the Mississippi River and visit the Split Rock Lighthouse and see Judy Garland’s childhood home and throw rocks from the shores of Lake Superior and see how wild rice actually grows, and this is just the beginning of our trip. We hope to do this for at least a year, but maybe longer. Who knows? Either way, each day is an experience we’ve never had before.

With all of these adjustments, however, it’s also been nice to just stay put and make a pie. Especially when that pie includes a thick Oreo crust, creamy chocolate filling, a mound of fresh whipped cream and a sprinkle of even more Oreos and chocolate (because WHY NOT). And the best part is — it’s entirely no-bake, meaning you don’t have to suffer through the heat of the oven at the height of summertime. SO MUCH WIN. 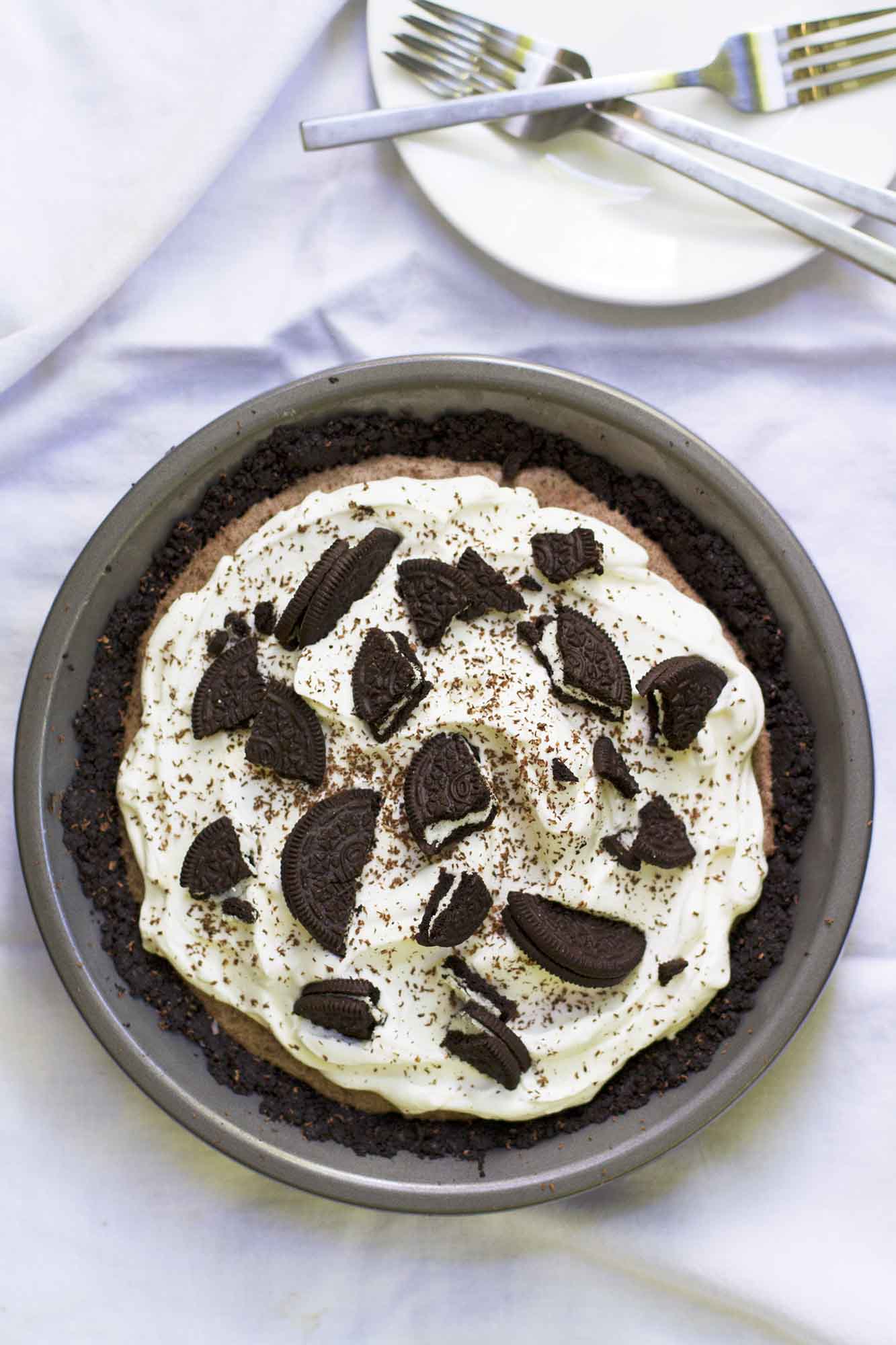 This pie is the start of a short series I’m hoping to be doing on the blog of no-bake recipes, because as much as I love me some baked goods, girlfriend needs to keep her cool. So stay tuned for more recipes of the no-bake variety coming down the pipeline! Until then, let’s address this pie.

The crust is made by combining Oreo cookie crumbs and butter, and then it’s refrigerated. OK. Cool. Easy-peasy. Then the filling is made by cooking some sugar and eggs until they’re basically just warmed through, so that’s like three minutes tops of actual cooking duties. Then you whisk in some chocolate and some butter, make some whipped cream, fold some of that into the pie, then realize that the filling is made of all the heavenly food groups (chocolate, butter, sugar, cream, helloooooo), chill the pie until its set (the hardest part of this whole recipe, really). Then you top it with the extra whipped cream and some more Oreo cookies and chocolate shavings. And that’s it! 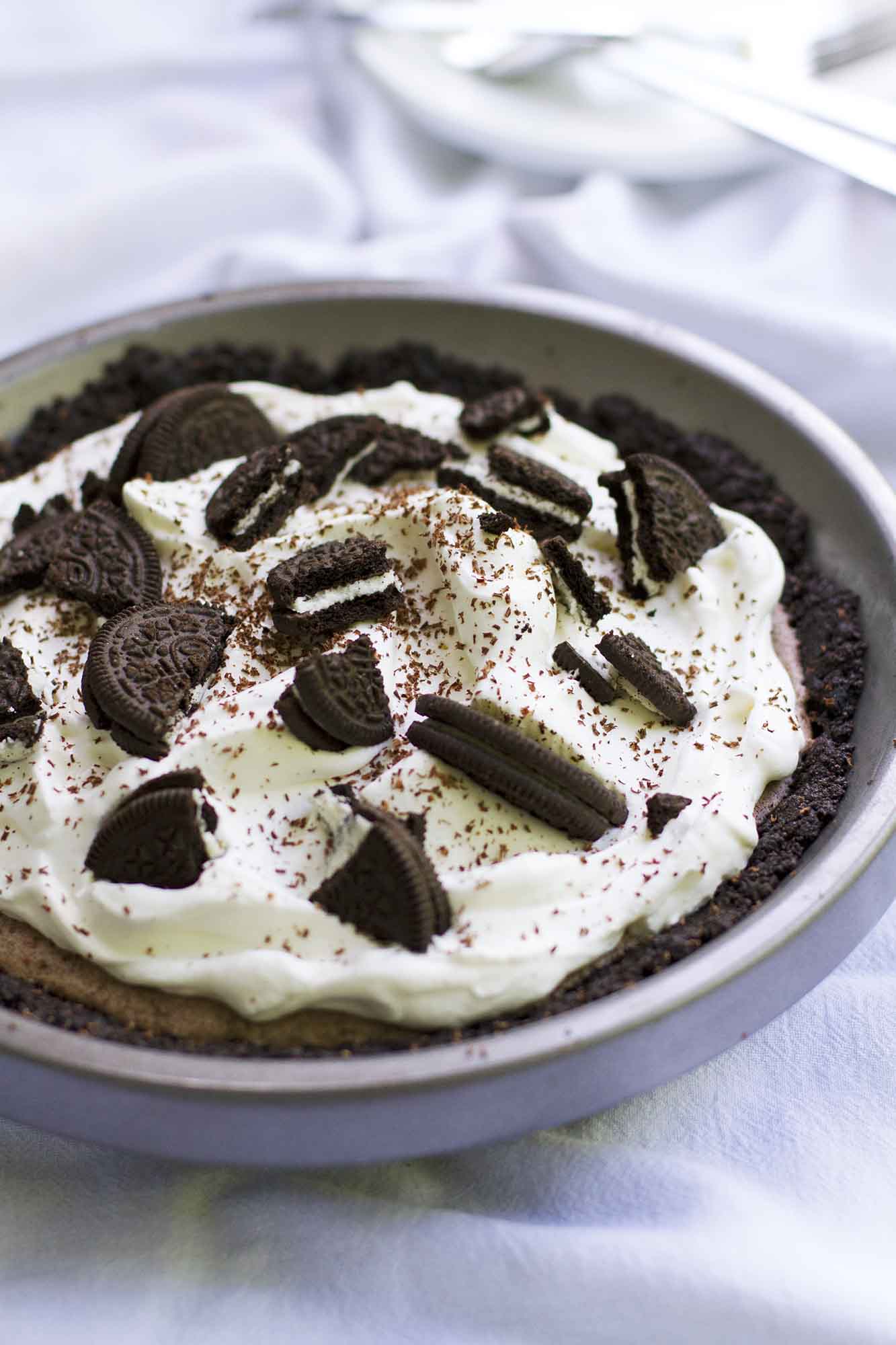 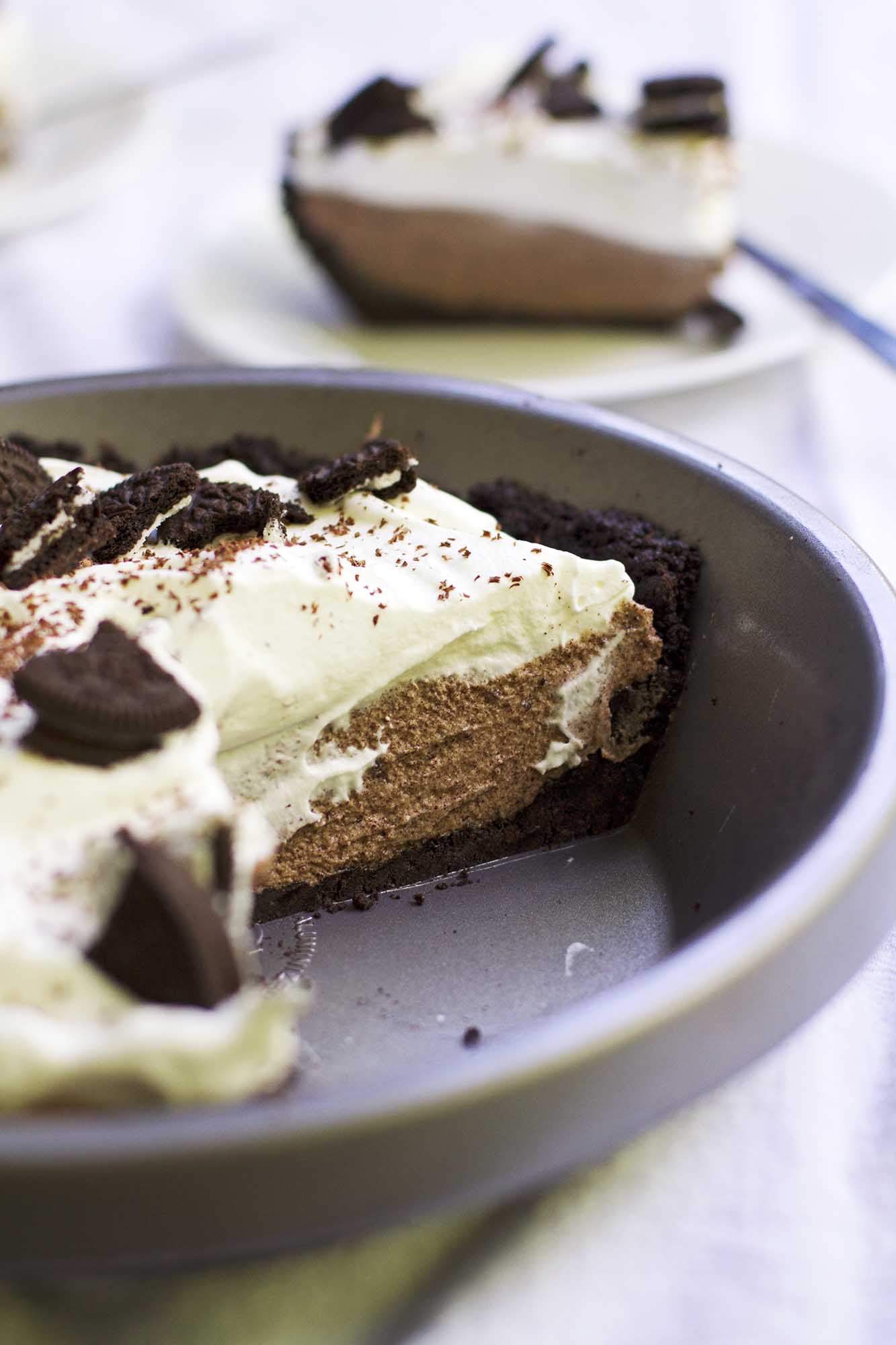 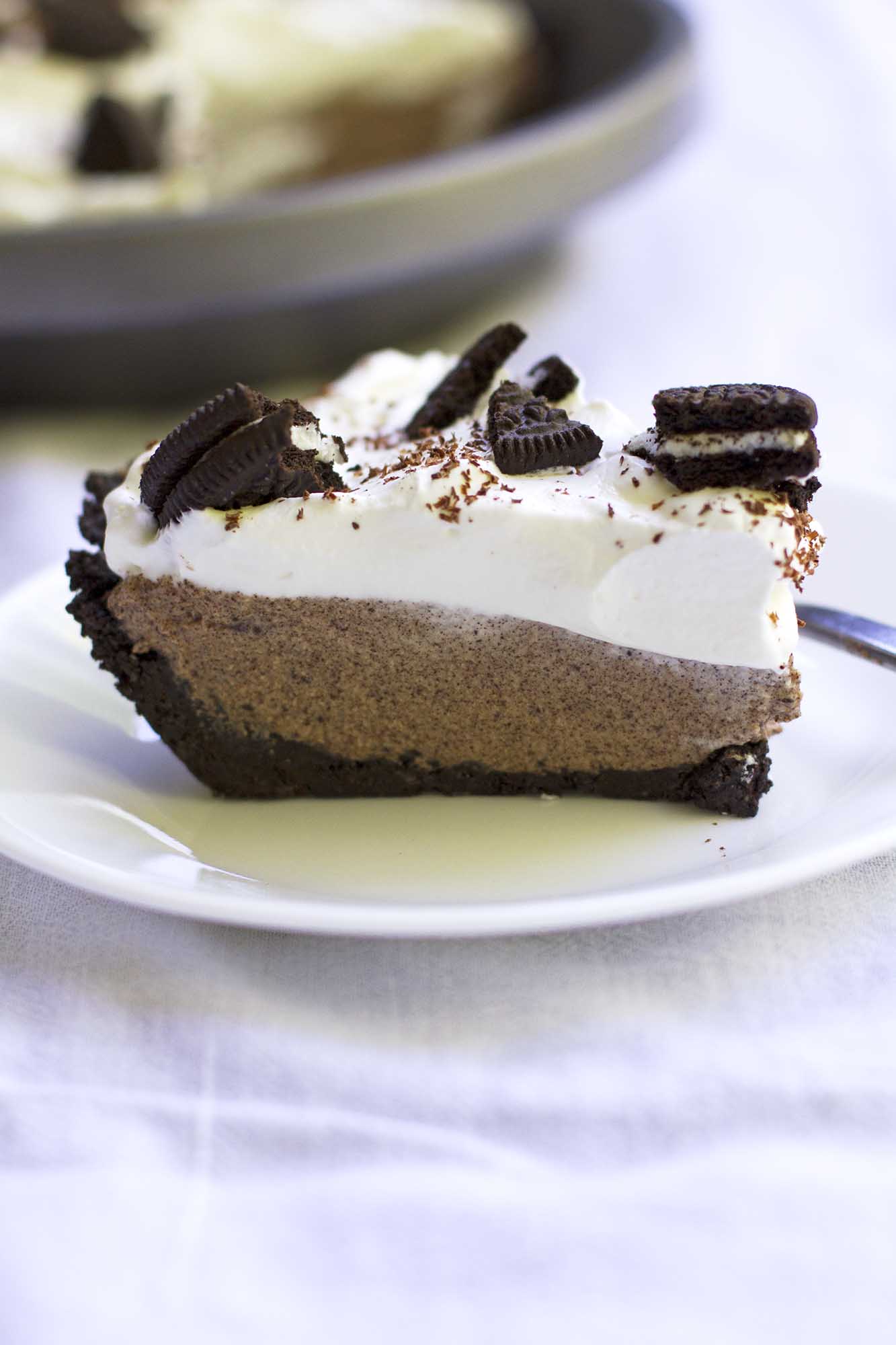 Summer may be more than halfway over, but that doesn’t mean we can’t still make the most of it. So gather your friends, make this pie, enjoy the weather whilst eating said pie and don’t even sweat it. That’s just the right way to live.