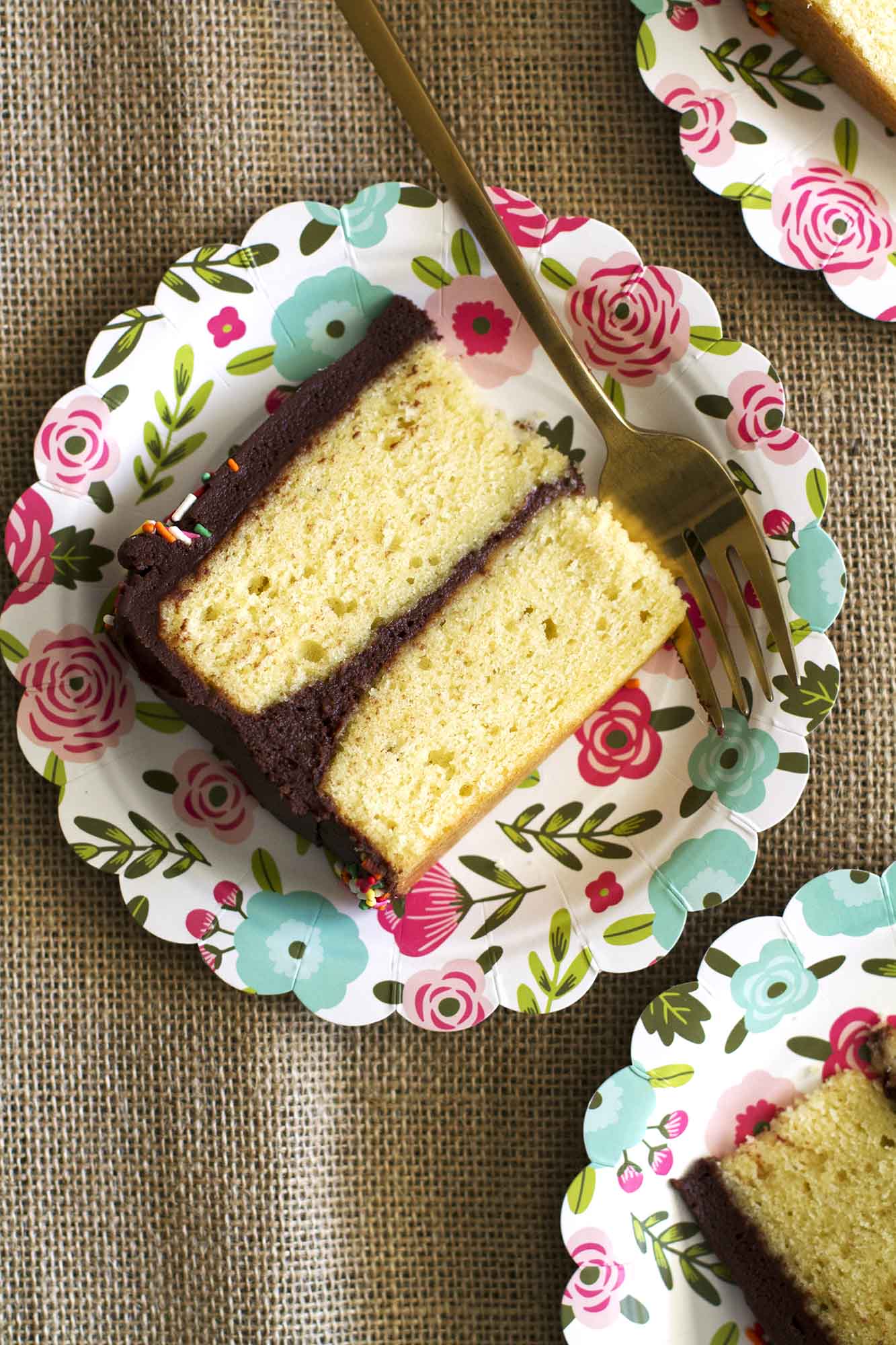 Well, I basically blinked and my baby turned one. Guys, the time FLIES. It really, really does. I can’t believe I’m a year down into this mom-of-two thing. I may have a few more wrinkles and a backlog of eleventy billion hours of sleep I need to catch up on, but man — every day spent with my two girls is sweet (and sometimes sour, when one of them steals a toy from the other one or, heaven forbid, one is eating a banana and the other one isn’t and the one who isn’t eating a banana MUST HAVE THE BANANA NOW, but I digress).

From the last week of April through the first two weeks of May, three of the four of us have birthdays. Addy’s is April 27, mine is May 8 and Avery’s is May 9. So essentially, we just have one ridiculously long birthday celebration for almost a month, with lots of cake. It’s the best.

For Addy’s birthday this year, we had a small family party with some brunch food (guys — I just discovered that I really love quiche. Quiche is tasty! Will be having more quiche in my life) and this yellow cake with chocolate buttercream frosting — a classic birthday cake for a really special little lady. And a good time was had by all. 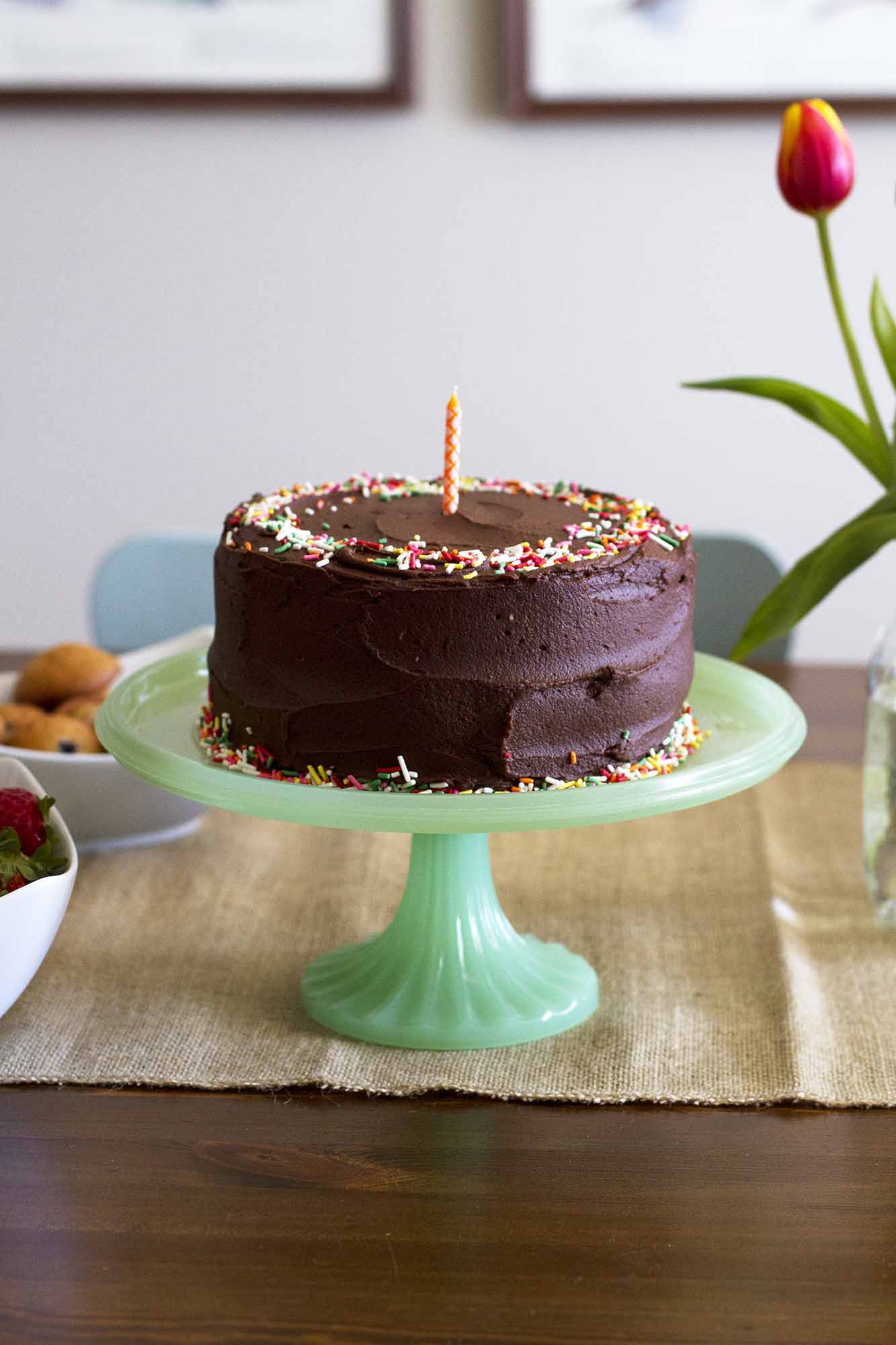 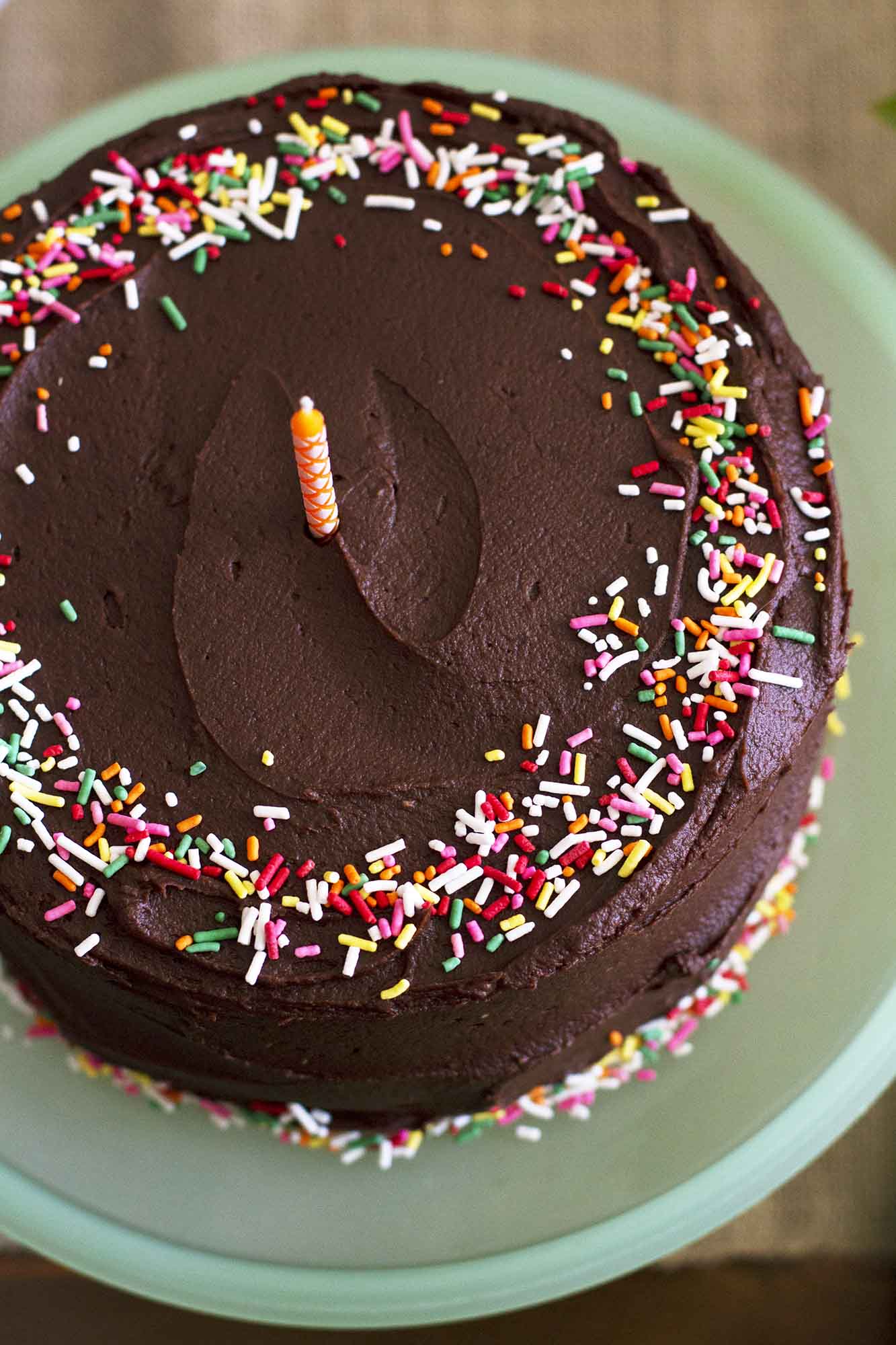 When I made Avery’s first birthday cake, it was my intention to make that HER cake — as in, every year on her birthday, she gets her special cake. Well, maybe we’ll get to that point, but for now, each year begs for something new from the pint-sized girl with the strong opinions. Last year, it was cupcakes. This year, it was a cake that looked like a bunny. Next year it’ll probably be something similar to those massive displays they make on Cake Wars. Who knows. All I’m saying is, I’m looking forward to the day when she’s finally OK with something that doesn’t involve pink and glitter and maybe doesn’t talk about said cake for six months straight prior to her birthday so then I’d feel reaaaaalll guilty if I didn’t just make the cake she asked for, but ANYWAY. One of these days, we’re going to just stick with the same cake flavor like we did back in my day. Ahem.

But since Addy isn’t old enough to protest and actually never had cake until her first birthday, I got to decide her cake for her. I’ve always been wanting to make a classic yellow cake with chocolate buttercream frosting that really nails how I envision this iconic celebration cake in my mind — a sturdy but moist crumb, lots of vanilla flavor, and the frosting is super chocolatey and fluffy but also thick and almost mousse-like and not too sweet. And sprinkles. There must be sprinkles. And this recipe covers all the bases.

The cake is actually adapted from one of my favorite baking cookbooks, The Vanilla Bean Baking Book (written by Sarah of The Vanilla Bean Blog), and in her recipe Sarah uses the “reverse creaming” method — essentially, this means you add the butter to the dry ingredients and make a coarse crumble of sorts before adding the remaining ingredients, instead of creaming the butter and sugar together first like one typically does with cake. In doing so, the cake is able to be dense but not dry or too heavy — it’s delicate but not overly fluffy like a boxed cake mix can be. I think I’m doing this for all future cakes, because I love the results.

The frosting is an adaptation of a chocolate buttercream from Sally’s Baking Addiction for which I am now officially head over heels. It’s thick and fluffy and intensely chocolate-flavored but not overpowering: which is how I prefer frosting. I can’t stand the super-sweet stuff that takes over the whole flavor of the cake and leaves you with that cloying taste (in fact, I was that kid who always took the frosting off the cupcakes at birthday parties and just ate the cake part). This is so not that frosting. This is the frosting of which dreams are made. It received my grandma’s seal of approval, so you know it’s legit. 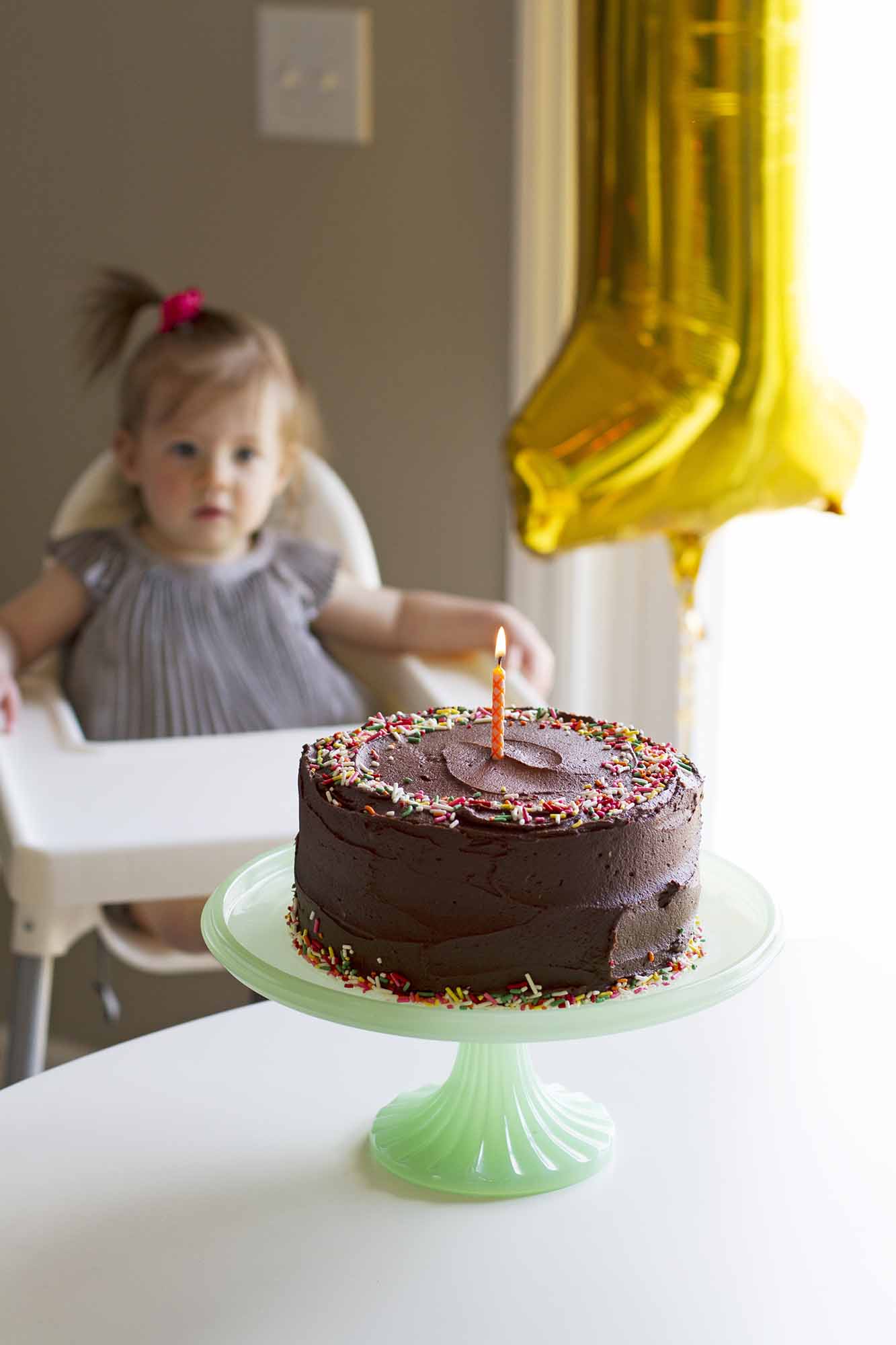 Combining those two recipes as my base, putting it all together, adding some sprinkles and topping it all off with a single candle, I had made my classic birthday cake dreams come true. And I think I made every one of Addy’s dreams come true, too, as she devoured that cake like it was her job. As you can tell from the photos below, things got out of hand quickly. She’s amazing. 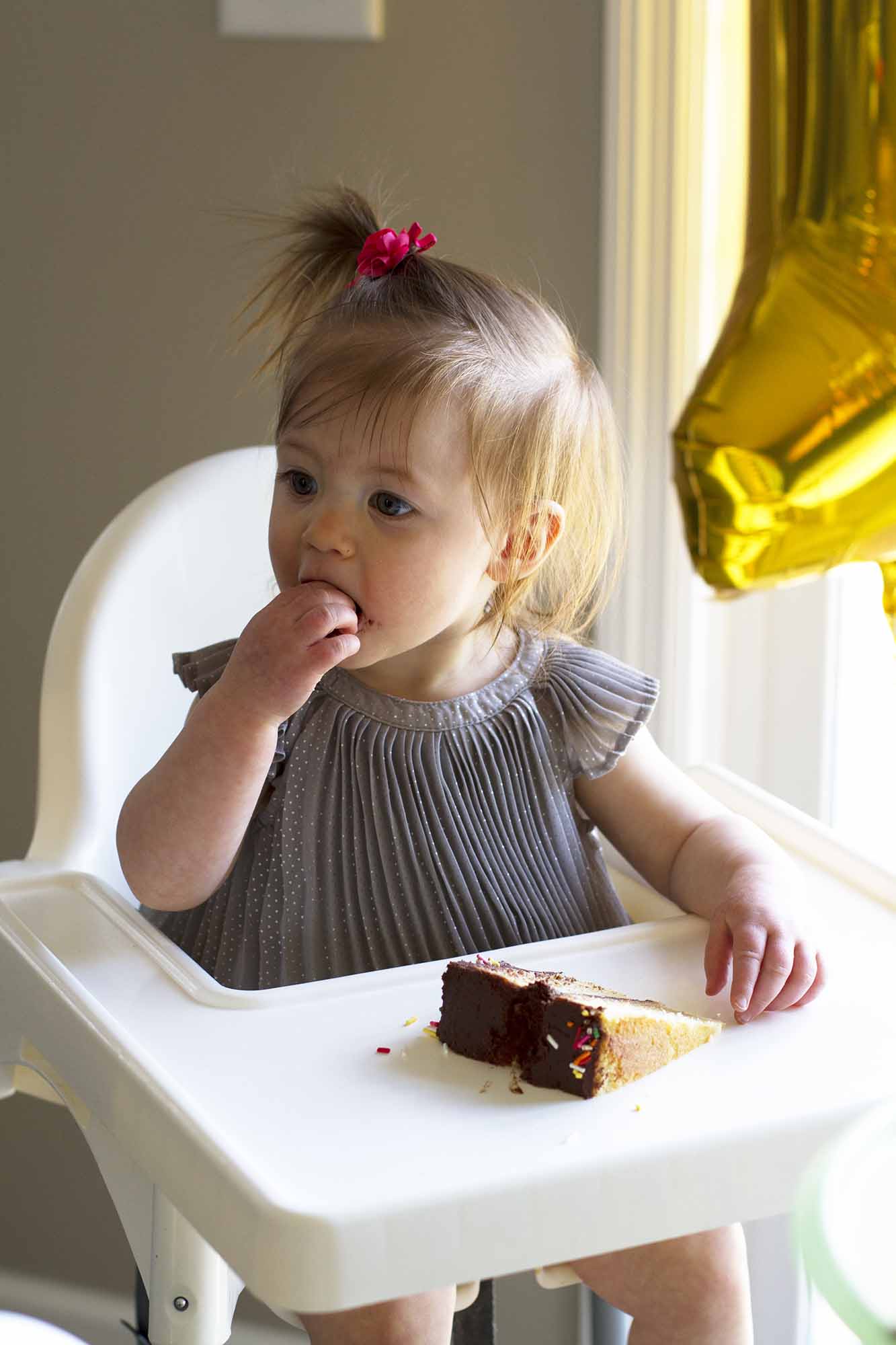 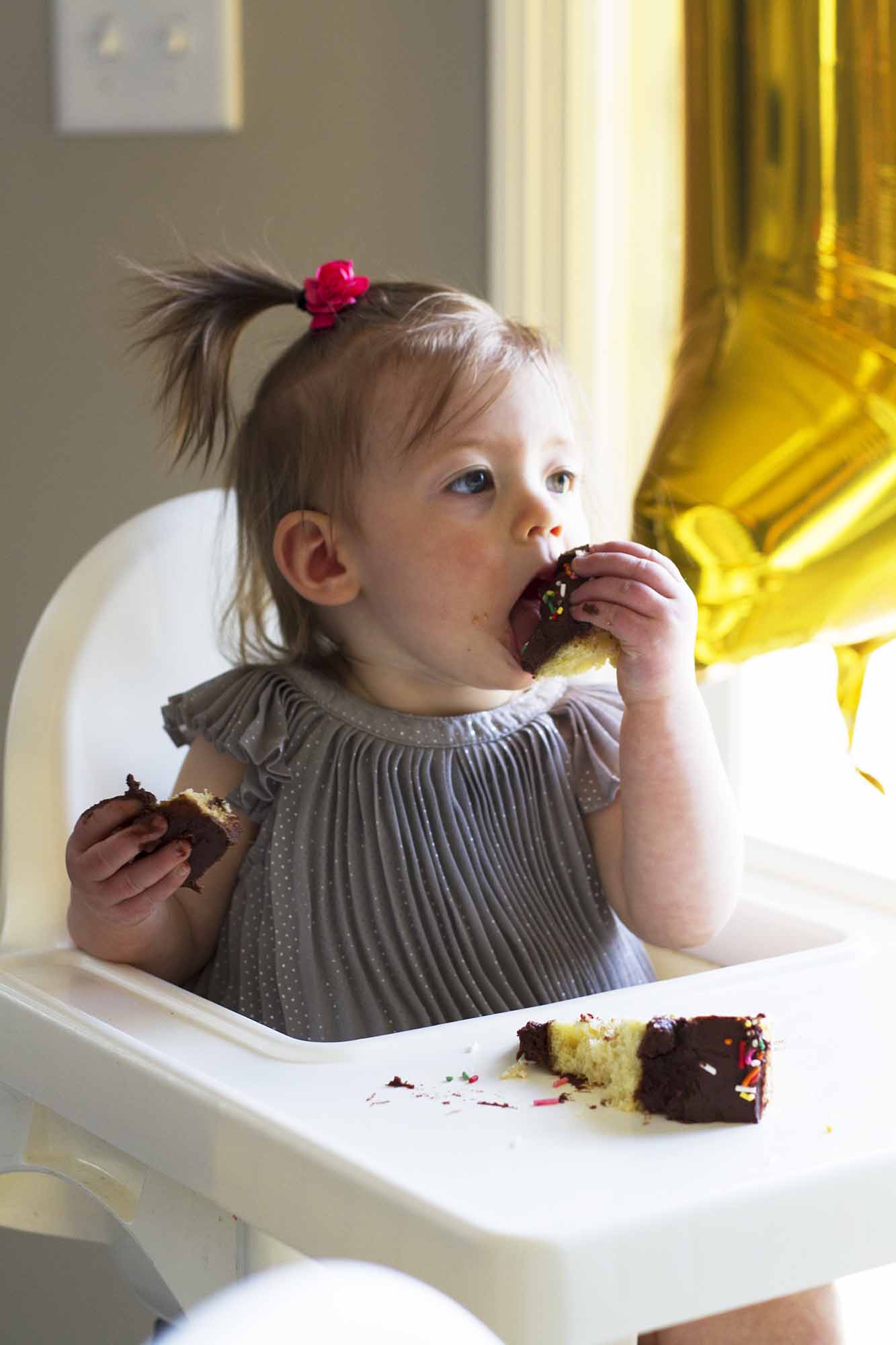 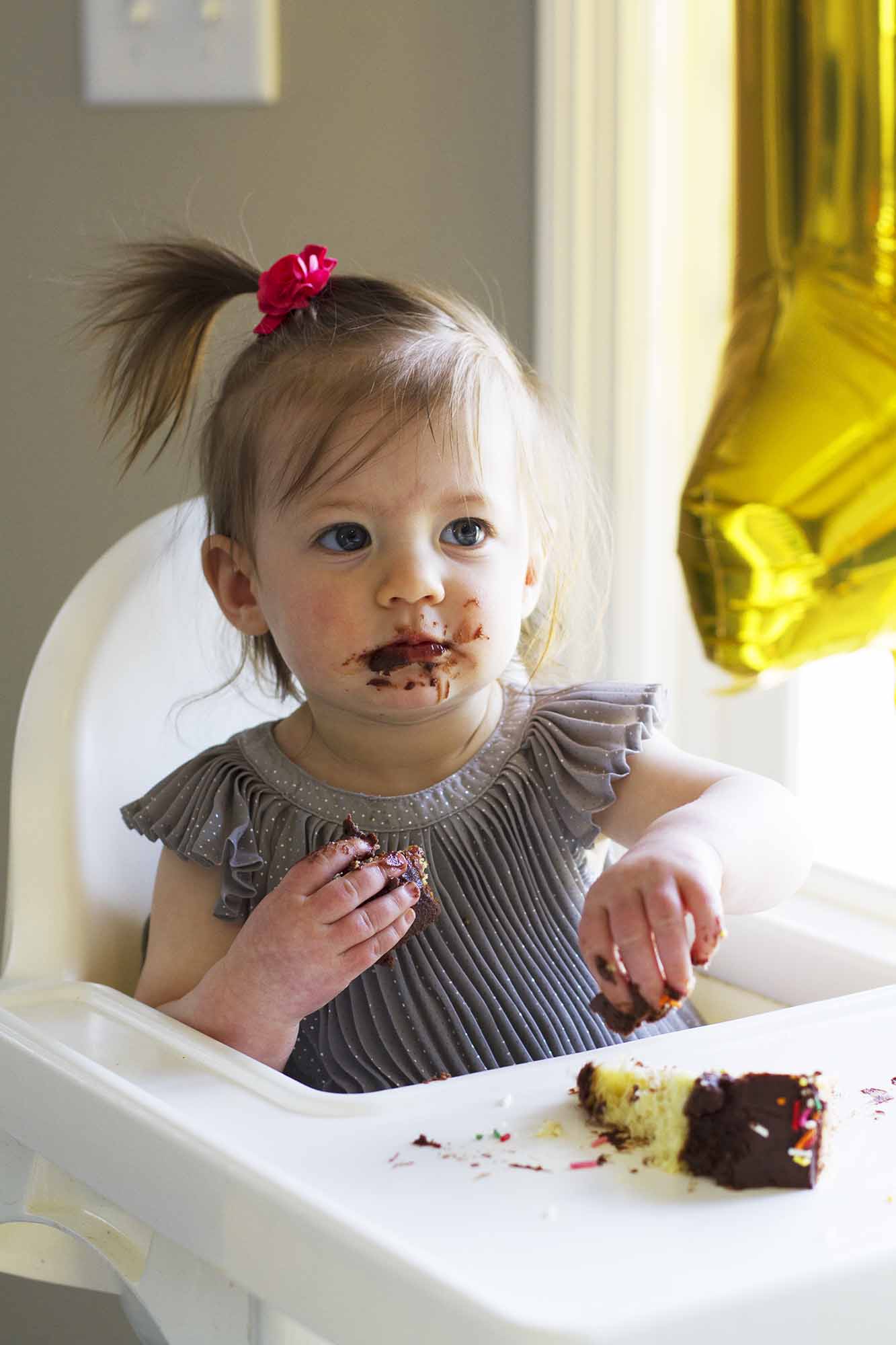 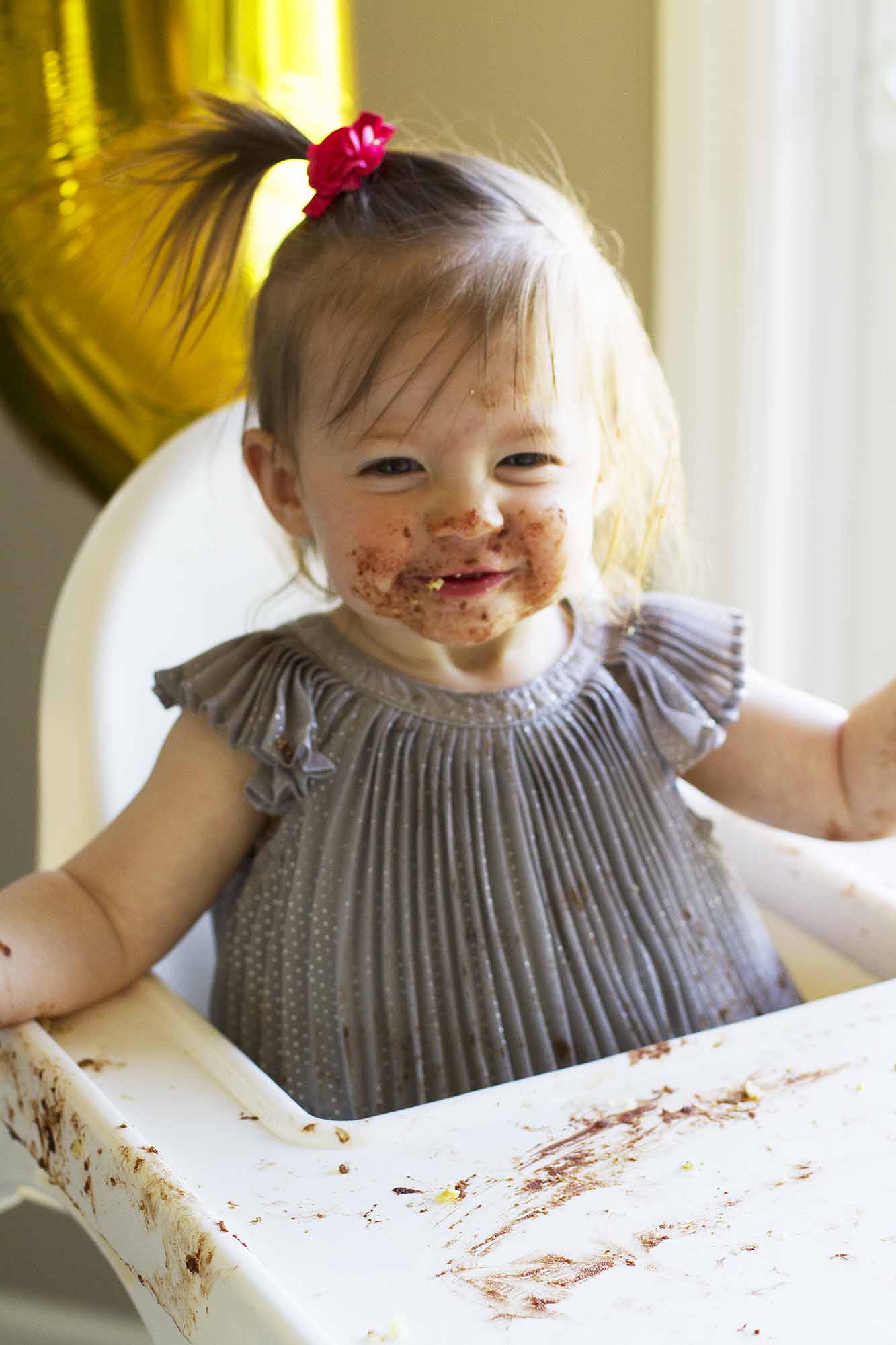 Happiest of birthdays to you, sweet girl!