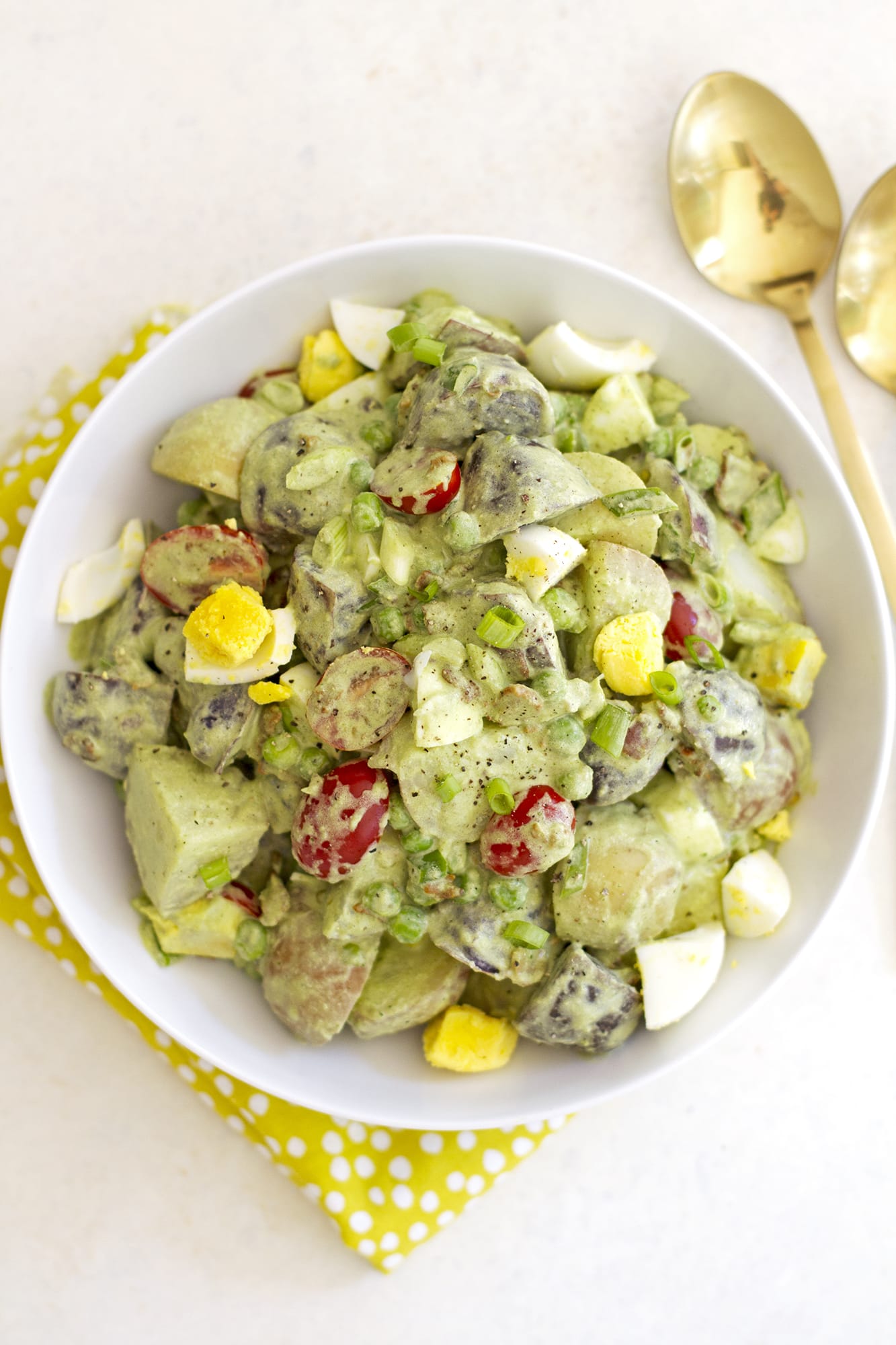 Ladies and gentlefolk, I present to you your new go-to summer potluck dish. Those of us in the Midwest know the potluck well. In winter, it’s all about bringing hot dishes in slow cookers stuffed in boxes with blankets to keep food warm (I’m serious — at one potluck I went to last winter, about eight of 10 people came bearing blanketed crockpots in cardboard boxes, and it was amazing).

In summer, it’s all about bringing food that pairs well with anything that can be grilled. Because in Minnesota in summer, it’s practically a sin to not be outside at all times.

This Green Goddess potato salad with bacon and peas is a natural fit for the latter (though I’d gladly eat it in the winter, too, alongside my warm hot dish from a blanketed crockpot). It’s just like a classic potato salad with hard-boiled eggs, but instead of mayo we use a creamy homemade, herb-loaded Green Goddess dressing, plus some crisp bacon and fresh peas. Bring this to your next gathering and you’ll be the Potluck Queen/King (which I’m pretty sure is better than being anything else, ever). 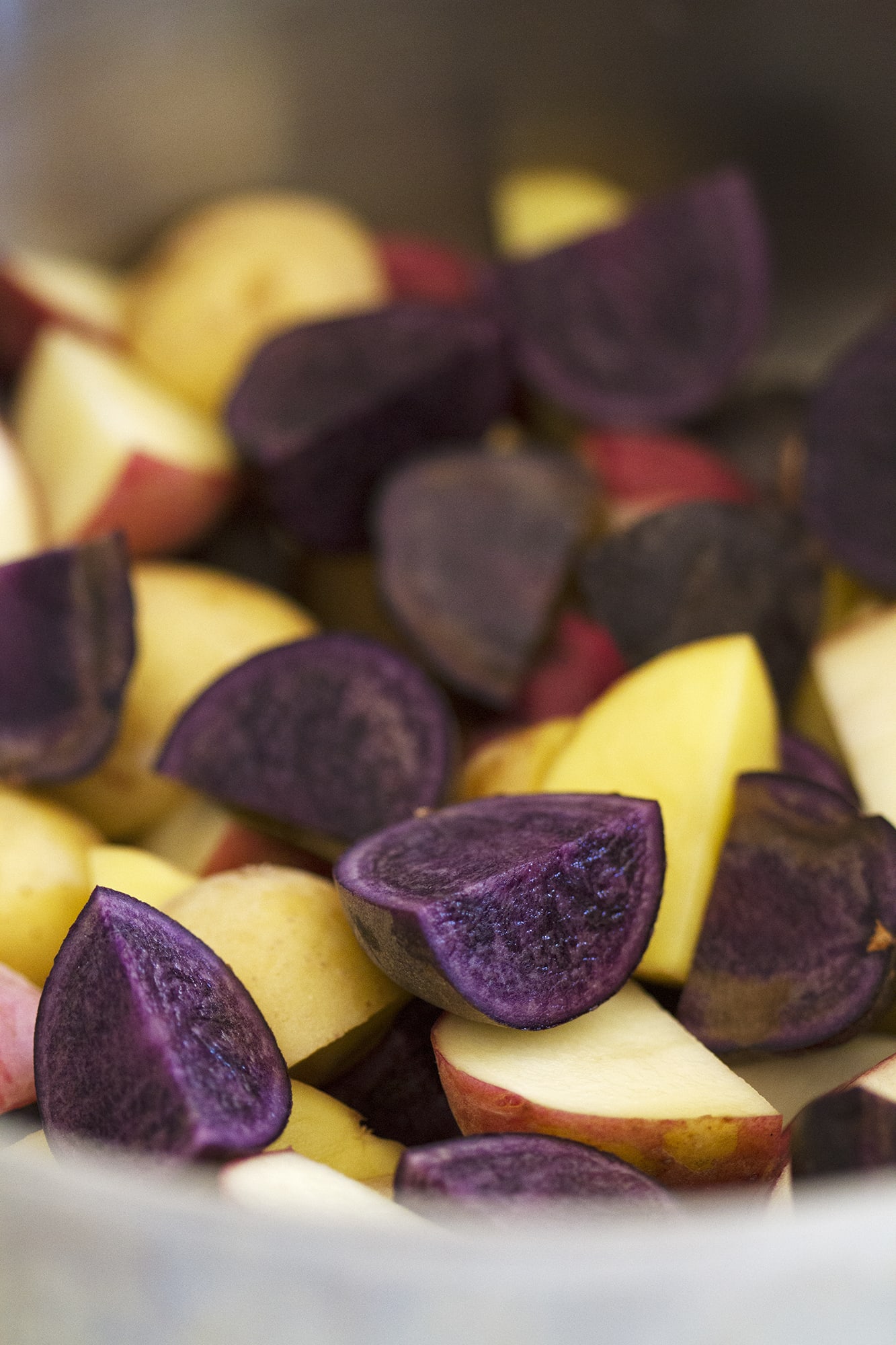 I don’t recall the first time I discovered Green Goddess dressing, but I do know it’s been a big part of my life for a long time. However, I never realized how good it could be until I stopped buying it in a bottle from the grocery store and started making it myself. I also never realized how easy it is to make, too. Basically, you puree a bunch of herbs with mayonnaise, sour cream, garlic, lemon and anchovies (!!) and in literally one minute, you have this incredibly bright and flavorful dressing for anything and everything, from salads to dips to tacos to sandwiches to this dreamy potato salad. 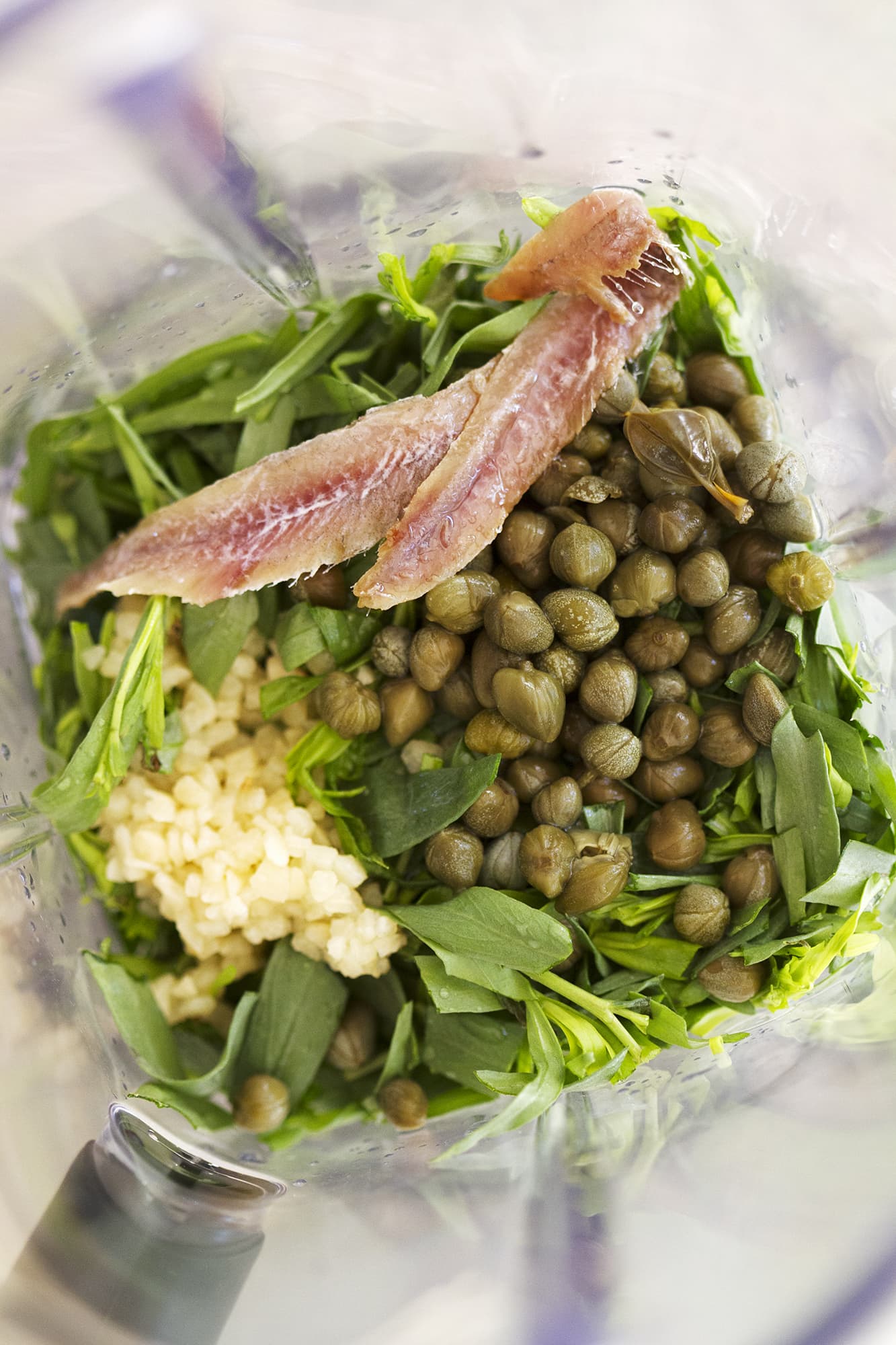 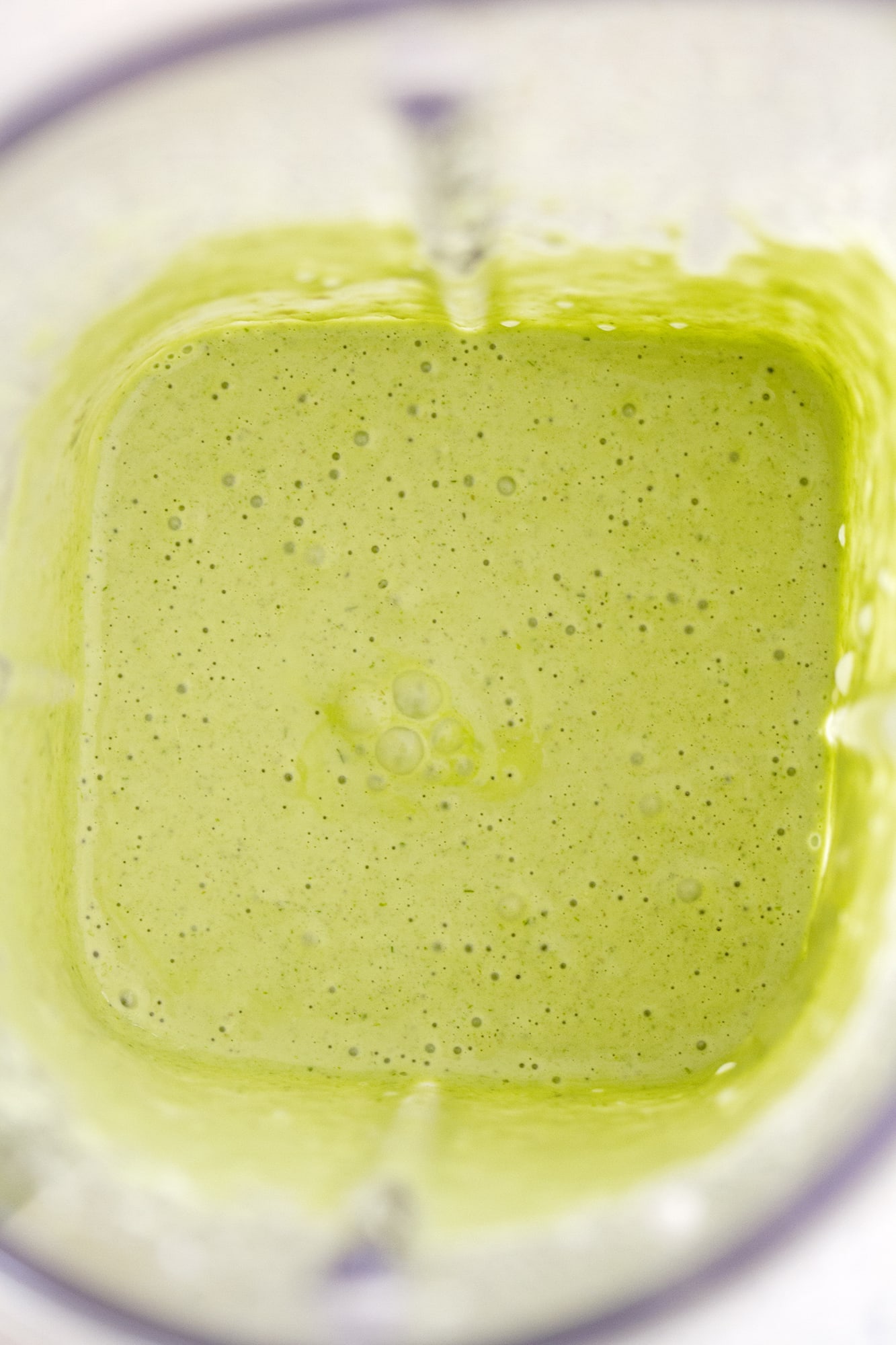 Of course, what makes this Green Goddess potato salad extra dreamy is the crisp salty bacon. I’m pretty sure anyone who loves to eat bacon would not be mad about its addition to a potato salad, least of all me. We love to use Niman Ranch thick-cut bacon whenever we can get it, and it’s THE BEST. And no one is paying me to say that. I just love that bacon so dang much.

The peas and tomatoes give the salad extra texture and freshness, and the scallions provide piquant flavor along with the dressing. Use whatever potatoes you like — for this recipe, I like to use soft-skin ones like purple, red and gold baby potatoes, but fingerling or even Russets work just fine. And don’t forget those hard-boiled eggs! To keep things classic, naturally. 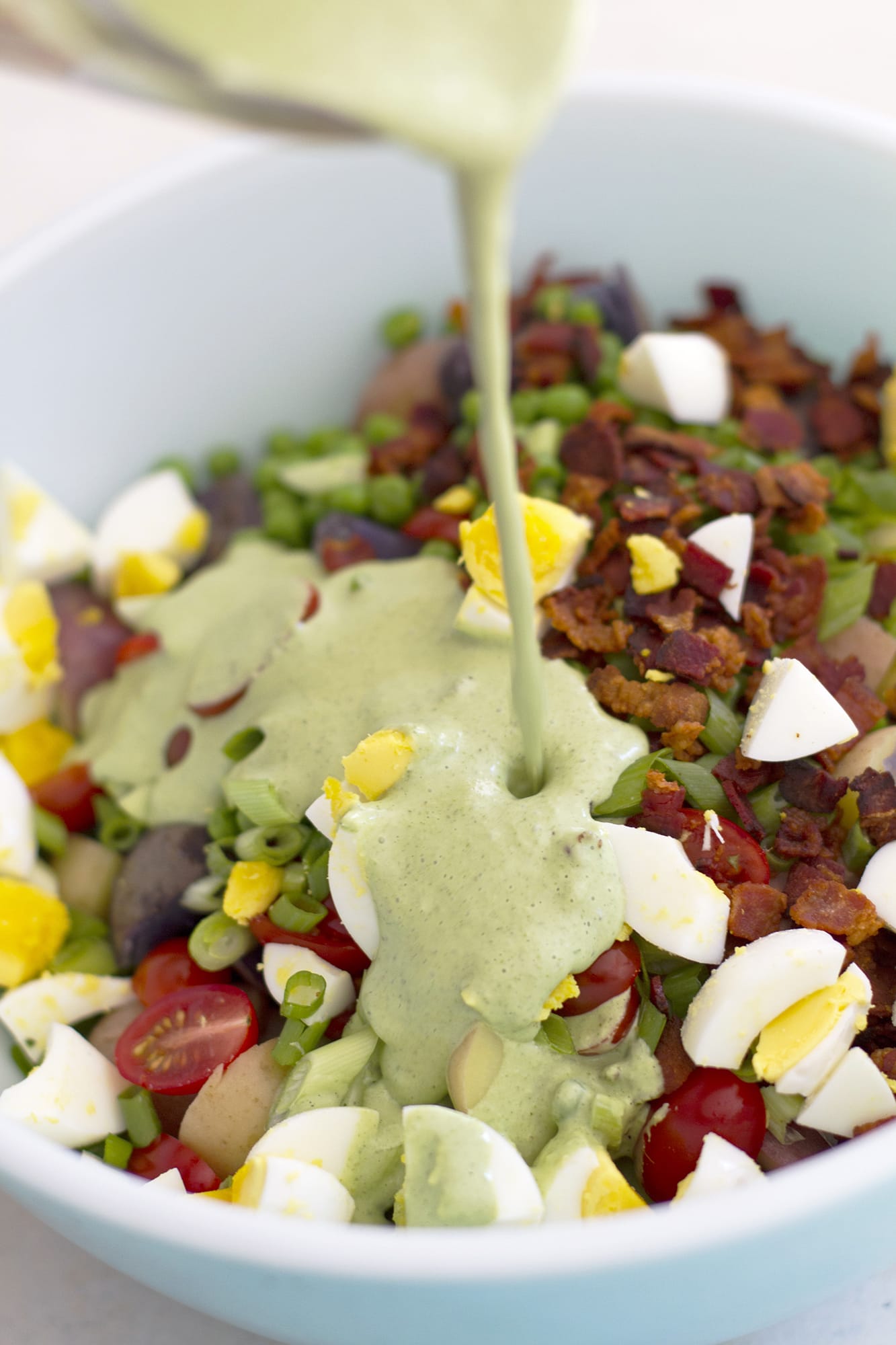 For the impatient eaters (i.e, ME), this potato salad can be enjoyed as soon as everything is tossed together, but it’s also really really ridiculously good if you let the flavors meld and mingle in the fridge for a few hours, even a day. It’s ready whenever the potluck is ready. 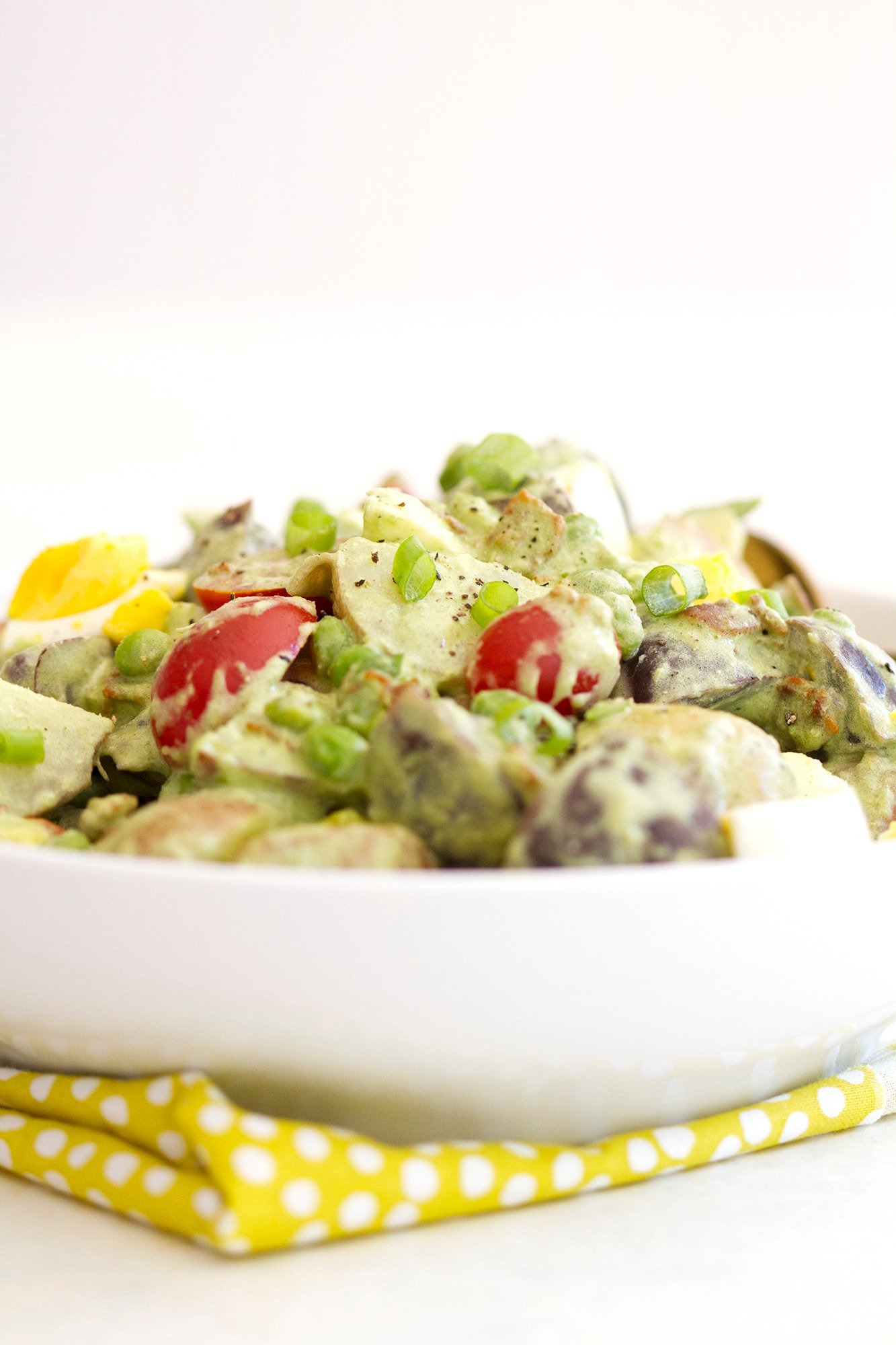 And now you’re ready to reign the potluck.