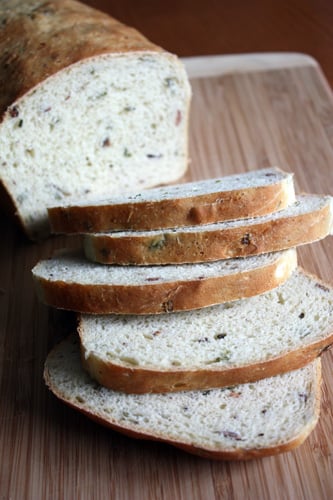 Lately, I’ve been a bit frustrated with baking bread. You see, homemade bread is a finicky thing. You have to be sure the yeast is alive, that the flour is properly weighed and that you don’t knead the dough too little, or too much.

It has to be smooth and elastic, but not sticky nor crumbly. If you don’t let it rise long enough, the flavors won’t develop and if you let it rise too much, well… I don’t know what, but I’ve heard it’s not good.

That said, part of the reason I started baking bread in the first place was to learn about these idiosyncracies — to find out, in short, what makes bread tick. 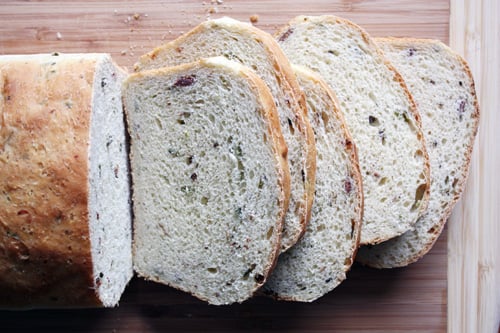 It’s been a bit of an uphill battle, learning the ins and outs of bread (side note: Peter Reinhart’s The Bread Baker’s Apprentice: Mastering the Art of Extraordinary Bread and Rose Levy Berenbaum’s The Bread Bible will tell you almost everything you need to know about bread. Truth.), and I’m still only halfway there, maybe. But I’m not letting the challenges deter me. After all, in this year and a half of bread baking adventures, I’ve learned that no matter how difficult or frustrating the recipe, the result is always worth the struggle.

One thing I have noticed in my hands-on experience is that potato bread is by far the best rising bread, ever. Each time I make it, it turns out perfectly. It’s always dense, but not too dense, starchy but not gummy, soft but not crumbly. To be honest, I still have no idea why potato bread rises so dang well — if you know, do share. All I know is that it’s one of my favorite type of breads to make not only because it’s easy to make and rises well, but because the dough itself is a dream to knead and the taste is out of this world. 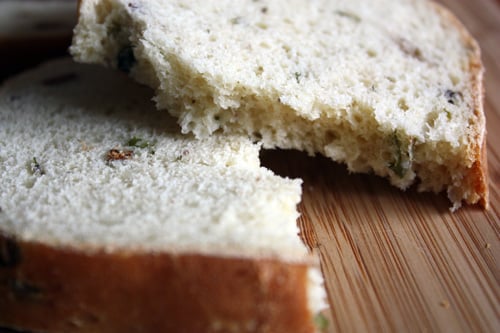 The local co-op was recently selling its own version of Loaded Baked Potato Bread, and after picking my jaw up off the floor upon hearing this news, I decided I’d go over there and buy about 100 loaves of it.

Turns out, I was too late. Bummer.

So, instead of wallowing in my self-pity, I decided to make my own version based on this Yukon Gold Potato Bread I made for Tablespoon a while back. Like that bread, this version rose incredibly well and made for a perfect sandwich loaf. Plus, it really does taste like a loaded baked potato with chopped green onions, sour cream, butter and bacon. Though I chose not to include cheese, feel free to top your loaf with the stuff, and if you’re not a fan of bacon, leave it out. 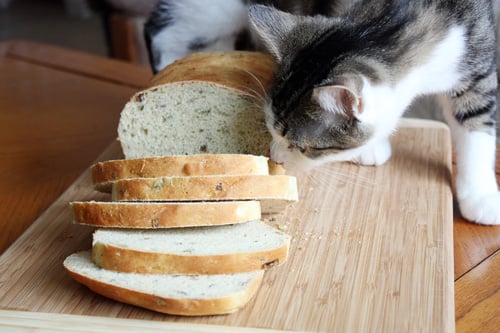 And if you’re a cat, please stay out of the photo shoot until it’s your turn. Good grief.

Directions:
In the bowl of a stand mixer, combine water and yeast and whisk until yeast is dissolved. Let stand about 3 minutes or until yeast is foamy. Add in butter, salt, sour cream and potatoes and mix with paddle attachment until combined. Add in bacon and green onions and mix until just combined. Add in flour in thirds, mixing with the dough hook, on low, as you add in the flour. Mix until dough completely pulls away from the sides, then remove the dough and knead by hand about 10 minutes, or until dough is smooth and elastic.
Place dough in a lightly greased bowl, cover with plastic wrap and let rise until doubled, about 1 hour.
Remove risen dough from bowl and press down with fingers into a 6 x 8-inch rectangle. Roll up tightly from the short end and place the dough, seam-side down, in a lightly greased 8 x 4-inch loaf pan. Cover with plastic wrap and let rise until doubled, about 1 hour.
Meanwhile, preheat oven to 375 degrees F.
Once dough is risen, uncover and bake about 30 minutes, or until golden brown on top and a thermometer inserted in the center reads 190 degrees F. The bread should also make a hollow sound when thwacked on the bottom.
Remove from oven and cool in loaf pan about 10 minutes, and then completely on a cooling rack before slicing or serving.